Update 11/14 3:30 pm: The Canadian victims have been identified as Toronto couple Stuart Robertson and Birgitta Wannersjo. Both had worked for a defense and aerospace company, according to Canadian sources.

The Blue Hawaiian tour helicopter crashed into a mountain ridge about a quarter-mile behind the school about 12:15 p.m. Thursday. The pilot and four passengers – including a newlywed couple from Pennsylvania and two people from Ontario – were pronounced dead at the scene, according to officials.

The cause of the crash remained undetermined as of Sunday night. The National Transportation Safety Board (NTSB) is leading the investigation alongside Federal Aviation Administration (FAA) officials, FAA Spokesman Allen Kenitzer said in an email.

A preliminary report by NTSB investigators should be available within two weeks, he said, and a full report determining the cause of an accident typically takes months.

Residents noted high winds, intermittent downpours and low visibility in Kilohana around the time of the crash.

Maui County officials identified the pilot as Nathan Cline of Kihei, according to reports. The newlyweds were Nicole and Mike Abel of Murrysville Penn., according to a statement from their employer, Westinghouse Electric Company. 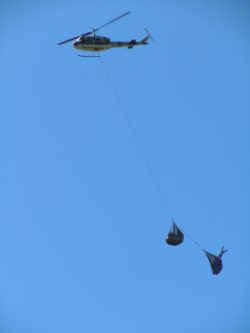 The aide declined to be interviewed.

Although the school did not go on lockdown, staff were instructed to keep students in their classrooms. Stevens said the staff followed “perfect protocol” in handling the situation.

“The safety of the kids is the No. 1 priority,” Stevens added, noting that the school has technology to simultaneously alert all parents if the school were to go on lockdown.

Lodise said emergency responders arrived at Kilohana School within about two minutes of the crash.

Molokai police and fire officials accessed the remote crash site via ATV and helicopter, entering through an access road in front of Wavecrest Condominiums.

The Blue Hawaiian tour company was leasing the Eurocopter EC130B4, which was built last year, from Nevada Helicopter Leasing LLC, according to the FAA’s online registry.

The aircraft was on a 45-minute tour of West Maui and Molokai when it crashed, according to reports.

For the original online version of this story, last updated Nov. 11, click here.