Unemployement Rates: The Story Behind the Numbers 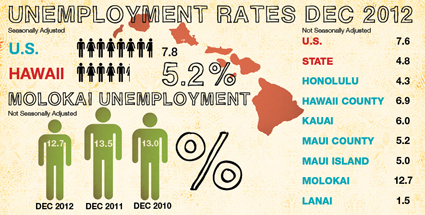 So, the unemployment numbers are in. Things are looking bright for the statewide average, with 5.2 percent unemployment ringing in the lowest rates since October 2008. But the numbers on Molokai are dismal, with a percentage of 12.7 doubling that of the rest of the state.

And numbers can’t lie, right? Well, that’s not always true. We wondered why Molokai was such an outlier in the stats and contacted the state Dept. of Labor and Industrial Relations (DLIR), which released the recent data, to find out. It turns out there are a couple of explanations.

Phyllis Dayao of the DLIR’s research and statistics office offered us an enlightening explanation as to why the numbers don’t tell the whole story for Molokai. Part of the discrepancy, she said, lies in a problem with the agricultural component of the labor force numbers statewide.

“We are unable to get data from Molokai ag employers (they don’t respond to our surveys) and have to utilize data from other sources for the models that we run,” she told us via email. “This problem is most noticeable on Molokai due to the smaller labor force and the high proportion of agriculture.”

The department’s spokesperson, Bill Kuntsman, explained some of the variables that affect data collection. Labor force statistics are derived from a monthly survey of Hawaii residents with a sample size of about 1,000 households. That means for islands like Molokai with smaller populations, the data becomes less accurate.

“For neighbor islands, you’re looking at it through that lens,” Kuntsman said. “[The data] is a means to look, [but] it’s a glimpse.”

According to the DLIR, a series of questions are asked to assess whether a person is currently part of the labor force, and if so, what is their current employment status. People are classified as unemployed if they do not have a job, have actively looked for work in the prior four weeks, and are currently available for work.

Another factor to look at when studying the numbers is seasonal adjustment. This is a statistical technique employed to take into consideration seasonal fluctuations in the number of employed persons reflected by anticipated periods of increased employment, such as holidays or summer vacation. When a statistical series has been seasonally adjusted, data for any month can be more meaningfully compared with data from any other month or with an annual average, according to the DLIR.

But variations and explanations aside, Molokai has historically shown some of the nation’s highest unemployment rates. At the end of the day, quality of life speaks many more volumes than money. But we’ve also heard it said that there are actually lots of jobs available on the island, and people just don’t want to apply for them. So if you’re not earning a paycheck, apply for a job vacancy or create your own business opportunities. Let’s raise the stats. Let’s prove them wrong.