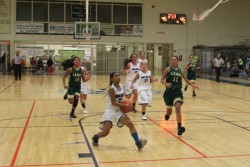 Molokai defeated second-place Lanai (3-3) twice last weekend at The Barn, squeaking past the Pine Lasses 48-45 on Friday and pounding out a 54-22 win on Saturday.

Lanai led at the end of the third quarter on Friday, but the Farmers wrapped up the win with a couple of free throws by Precious Rawlins with barely a second to go. Rawlins scored nine, while Lehiwa Pedro and Rebecka Adolpho had 12 points apiece. On Saturday, Pedro again led the attack with 10 points. Kelcyn Balbas scored nine.

The Lady Farmers’ only loss last season came against Lanai, but for Head Coach Lee DeRouin and the Farmers, that wasn’t a factor.

“We’re not even talking about last year,” said DeRouin. “All we’re worried about is this year’s team. We are creating more shot opportunities and the girls are really starting to become a team.”

Molokai has doubled opponents’ scores in four of their six games. In a pair of road match-ups against Hana on Dec. 26 and 27, the Farmers won 44-23 and 62-29. Adolpho had 14 points and Pedro had 10. Hepuakea Falealii, last season’s MIL D-II Basketball Player of the Year, scored 11 in the second game.

However, it’s the Farmers’ suffocating defense that’s triggered their hot start. The Farmers allow an average of 25.3 points a game, the best in the league. Second best is Seabury Hall (3-3), which allows an average of 38.5 points per game. Against Seabury Hall on Jan. 2 and 3, the Farmers had their best defensive performances, winning 47-17 and 51-16.

Instead of tiring toward the end of games, Molokai’s defense becomes even more relentless. Three times this season they’ve held opponents to 10 points or fewer in the second half.

“The girls do a good job after halftime with any changes we implement,” said DeRouin. “They’ve been getting at it very good defensively.”

DeRouin said the team still has work to do on offense. With such a high-tempo defensive game, they consistently force turnovers and have to work on slowing down once they switch back to offense, he said.

“All the girls have been working hard,” said DeRouin. “When they believe in the system, believe in the roles for the team, and put the team first, good things happen like that.”

The Farmers’ final home games are against the Hana Dragons on Jan. 16 and 17. The boys’ team starts its season the same weekend against the Dragons.

Rick Schonely contributed to this report.