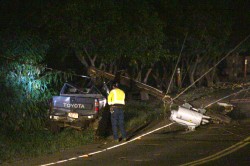 Residents of Kaunakakai were left without power Friday night after an unoccupied truck crashed into a utility pole. The truck had been left in neutral on the hill near Molokai General Hospital, according to police. Shortly after 10 p.m., it careened backward, totaling the vehicle and toppling the pole.

Witnesses said they heard a loud crash followed by a big flash of light. No injuries were reported.

About 500 residents were without electricity for approximately an hour, and the utility pole was replaced the following day, according to Maui Electric.