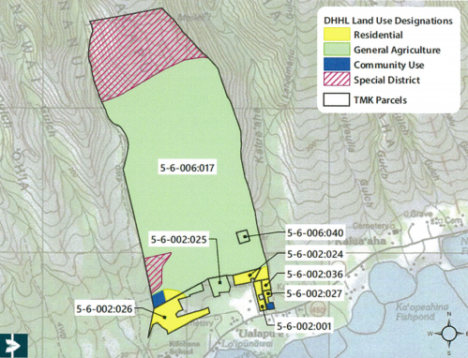 Molokai residents on the Department of Hawaiian Home Land’s (DHHL)’s decades-long waitlist have hope in a proposed new homestead development on Molokai’s East end. However, some feel the suggested Ualapu’e Kuleana Homestead Project poses many challenges that might not be worth the wait.

The Oct. 20 meeting at the Kilohana Rec Center was the third community meeting for the project and first since April 2022. It was an opportunity for DHHL to share results from a land and resource evaluation analysis. For Molokai residents, it was a chance to voice their mana’o on the project.

The Kuleana Homestead Program is an “alternative to traditional DHHL homestead, whereby beneficiaries are given the opportunity to lease un-improved, off-grid homestead lots,” per the DHHL website for the project.

According to the DHHL, this allows for quicker access to homestead lots and a reduction in waitlist time. As explained on their website, in this type of homestead the DHHL is only responsible for providing lot sizes and descriptions and an unpaved road to access them. Homestead residents are responsible for developing all additional infrastructure, including housing and water systems.

For this project, DHHL evaluated the proposed area based on recent archeological and ecological studies. DHHL research presented a number of possible issues with the land, ranging from the vast number of cultural sites to poor soil and lack of access to water.

For Molokai residents with concerns, their main objection was the impractical nature of the proposed land.

Molokai resident and Ho’olehua homesteader Walter Ritte explained that he liked the concept, but foresaw reasonable challenges. Given that the site encapsulates an entire ahupua’a, continuing to make that ahupua’a self-sufficient should be of chief importance, explained Ritte. He cited issues like erosion arising from further development as paramount for the plan.

Similarly, Molokai resident Linda Place explained “this space should be preserved because it has so much that has been lost,” referring to the 96 historic sites documented in the most recent DHHL survey.

Concerns over “stamping a new community over an existing community” already in place on the East end were echoed by multiple residents as well.

Repeated calls for ending the project were based on the idea that it is just not worth it. Some pointed out the land isn’t right for this kind of settlement plan. It is too steep and too close to ecologically and culturally sensitive areas to make sense. Others pointed out it sets a precedent for further development in the region and impinged upon the only well that serves the East end. Some residents asked if there was an ability for DHHL to swap this land with another or buy a new plot.

DHHL staff offered no options for a land swap or additional land purchase.

Residents in support of creating a homestead at Ualapu’e emphasized that any ability to help Hawaiian families acquire land is a positive action.

“Land is no small legacy,” said one Molokai resident.

While the land is not perfect, it does offer Native Hawaiians an opportunity to settle on the East end.

As Dartagnon Bicoy put it, “if you help one Hawaiian family, it’s worth it.”

“It is pretty mean terrain up there,” said Dickenson Stone, but added, “I do believe that we can put some Hawaiian people up there.”

Non-Molokai residents being eligible for this homestead was a major, unifying area of concern. Attendees of the meeting were united in their belief that Molokai land should go to Molokai people.

Residents also spoke to the personal histories that make this project especially significant.

Molokai resident Gwen Dudoit told her own story of letdown. She has spent almost 40 years on the waitlist for a homestead.

“I was getting excited,” said Dudoit “but I don’t think that’s going to work out for me.”

However, Dudoit encouraged all to recognize that “we are all Molokaians.”

Calls for unity amongst the partitioned conversation punctuated much of the conversation.

“Do not let this divide us,” urged one resident.

While opinions differed on the specifics, consensus remained that Molokai and its people were the most important issue.

“I am just so happy to be a Hawaiian,” said Ruth Yolanda.

The DHHL aims to have a Homestead Settlement Plan complete for community evaluation by early 2023.  A fourth community meeting will follow.

To catch up on notes and recordings from previous meetings, residents can visit the DHHL’s website at dhhl.hawaii.gov/po/molokai/ualapue-kuleana-homestead-project.