Two days in Manhattan, with Molokai 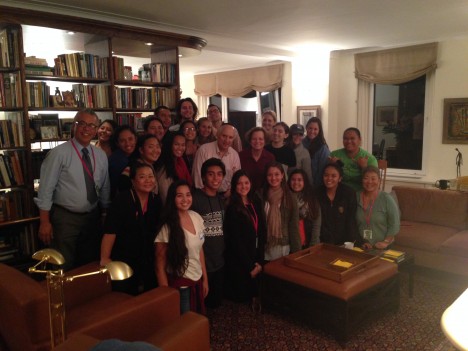 Sunday, Oct. 5 was a day that had been on my mind since returning to the Big Apple after living on Molokai for a year. It was the day I would get to reunite with Molokai, when a group of 10th and 11th grade students and four wonderful chaperons visited New York City. When I first laid eyes on the students, I was shocked at how well they fit in, they had so flawlessly adapted to urban fashion—tight jeans, fancy shoes—they looked like New Yorkers yet! While walking around with the students, I started asking them if they noticed any similarities between Molokai and Manhattan. Putting all the glaring differences aside, one student turned to me with the most simple, but poetic observation: “there are people in both places.” Wherever you are, I realized, people are ultimately people, with similar anxieties, dreams, desires, and it made me understand that no matter how far away from Molokai and its essence I am, we as people are standing on this earth together, breathing the same air, and there is beauty even in the most competitive concrete of jungles.

Later on in the day, I mentioned to Ric Ornellas that my father would be happy to host everybody at our house Monday night for dinner. After eating, and a discussion with the students about college and career, they performed a hula, after which I was prompted to grab my guitar and sing “Wahine Illikea.” The song has a special significance for me. It goes back to one day I worked in Halawa Valley and was completely overcome with the beauty and spirit of the day and place. I listened to “Wahine Illikea” over and over again, and I made a video of myself playing the song and sent it to my father.

He had recently become very ill and would soon spend a week in the hospital receiving treatment. The song became a source of strength for him while sick, and he listened to it every night before he went to sleep, and I think when he woke up too. At the time he wasn’t sure he was going to survive, and he’d write to me beautiful messages describing his love for the song.

While I was playing the song that night at my house, the students would join in for the chorus, and at one point I looked up at my father and saw he was singing too. It is something I won’t ever forget. When I finished playing, all my friends came up to me; first to say how incredibly happy they were to be exposed to this group from Molokai, and some of the culture of Hawaii, but also to express how they were almost brought to tears by my father singing. These two New Yorkers were so moved by these words that were born in the east end of this tiny island, the piko of Hawaii.