It’s not the size of the wrestler in the match, it’s the size of the determination in the wrestler. Ninety-eight-pound Molokai High senior Mikayla Pico proved that strength is more than just the physical when she wrestled an undefeated season, and faced her final opponent one-armed after an injury on the mat, finishing second in the state. Now, she’s been named Maui Interscholastic League (MIL) Girls Wrestler of the Year by The Maui News. 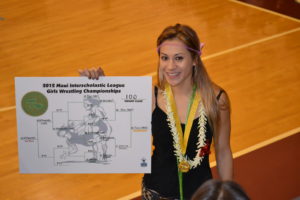 Seeded number one in the state competition, the Molokai wrestler dislocated her shoulder near the end of the season. The injury flared up during the semi-finals, but Pico fought through the pain and asked the trainer to pop it back in on the mat.

“I had invested so much time and energy, I knew I had to just stick it out – and the process of getting there made me a stronger person,” said Pico. “I had to win that – it was go hard or go home.”

And win the match she did.

The next day, in the state finals, her shoulder dislocated again. And again.

“It popped out three times during the match,” she said. Eventually, she pulled a nerve in her shoulder and lost all feeling in her arm.

“I was wrestling with one arm,” she said. “At that point, it was a really hopeless situation. All other matches there was a way I could improve… [but this time] I couldn’t do anything about it – it was the worst feeling.”

Despite her painful handicap, Pico lost to Kapolei High School’s Kaelynn Canyete by just one point, finishing the match 4-3.

Pico began wrestling as a freshman at Molokai High School, and while her first season didn’t bring her to stardom, her coach Benny Venenciano had faith in her ability to develop, especially with her background in 4-H.

“If a 100 pound girl can control a 1000 pound steer, then what more potential, strength and compassion do you need?” said Venenciano. “All I saw was potential.”

And while Pico may have shown promise, it was also hard work that won her the title of Wrestler of the Year.

“[There were] a lot of work-out sessions in the backyard, at my house, at the gym…” recalled Venenciano. “Sophomore year she said she wanted to become a district champ. I told her she had to practice.”

“She’s very intense, very driven,” said Farmers head wrestling coach Randy Manley.
“Anybody her age to have that kind of [attitude] is impressive.”

That drive showed when Pico spent all of summer 2011 training for the National Championship. After finishing second in the state tournament that February, she traveled to Utah after her junior year, where she trained three times a day.

There, she was the only girl training in a sport that’s dominated by boys, she said. She laughed when she said her training partners were often middle school boys – a better size match for the tiny Pico.

“Sometimes I thought, ‘I can’t believe I’m doing this, I’m crazy!’” she said of the rigorous training schedule.

She returned to the islands to train with Team Hawaii on Oahu before traveling to Fargo, North Dakota to represent the state in Nationals, where she placed third.

Despite her accomplishments, Pico remains humble.

“The love from my community, school, family and coaches helped me get this far… I couldn’t have done it without [them],” she’s quick to say. “It was that island pride that kept me moving – you want to show your island off.”

For Venenciano, it’s Pico’s balance of academics and athletics, along with her development as a strong individual, that makes her stand out.

Pico admitted that after her injury and losing the state title, “it was hard for me to cope, but I realized I accomplished way more as a person from competing at a national level – an opportunity that some kids don’t get.”

Great Things to Come
After graduating from Molokai High this spring, Pico will undergo shoulder surgery before starting college. She has been offered several scholarships for wrestling, and she said she just learned that she can register for classes and postpone wrestling until her sophomore year of school as her injury heals, while retaining her scholarship. She said she has a few options, but is leaning toward Southwestern Oregon Community College.

But her dreams don’t stop after wrestling in college and getting a degree in education.

“Being goal oriented, my life isn’t just going to be six minutes on the mat,” she said of expanding her horizons. “We have so much talent here on Molokai. One day I hope to come back and be the first women’s wrestling coach.”

“As a friend, coach and fellow [Molokai resident], she opened up the flood gates for anyone who dares to dream big dreams,” said Venenciano.