Treasures in the Hold 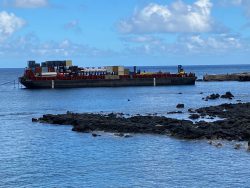 It appeared on the horizon at about 7:30 a.m. Then at 8 a.m, it had arrived in the inner harbor, and by 9 a.m. had settled in next to the pier at Damien’s Landing. Looking at it from my front porch brought to mind these lines from a Girl Scout camp fire song, “Barges, I would like to go with you, I would like to sail the ocean blue. Barges, have you treasures in your hold? Do you fight with pirates brave and bold?”

No, I was not in the Girl Scouts and for that matter, I was not in the Boy Scouts. I was much too busy in my youth making hay and playing Gaelic football, sometimes under the summer moon. On this morning, many moons later, I was looking at a treasure ship of a kind, loaded with lots of treasures eagerly awaited by the residents of this isolated peninsula. This was the annual barge day for Kalaupapa. The treasure trove had landed and there were no pirates to fight in sight.

Soon the frantic action began. I say frantic, because the action looked like that of a beehive. The unloading began when the tankers rolled off the barge and onto the street across from our grocery store. The helmeted and masked crew, on front end loaders and fork lifts, went to work unloading the many treasures from the hold. Meantime, our settlement men workers, helmeted and masked, from both departments, relayed the various items of cargo away from the vicinity of the dock. The helmeted and masked women of the settlement went around with their clip boards, issuing directives to the men. Isn’t that the way things usually work out?

As you can see, this year the work was done with extra caution because of the current COVID-19 situation and the fact that the barge crew came from outside of this settlement. We did not have our normal gathering of barge spectators here on the church lawn, nor did we have the usual cooked lunch. However, I myself did have a bird’s eye view of the whole operation. So I felt like the Lord of the manor house.

By 1 p.m., the last of the treasures, huge bags of cut stones designated for repair of the rocky road to Kalawao, had been unloaded. Then it was time to load the barge with shipping containers filled with scrap… another man’s treasure. By 3 p.m. the loading had been completed and the barge moved out into the open water. It was, as the Girl Scouts would sing, “How my heart wants to sail away with you, as you sail across the ocean blue. But I must stay beside my window clear, as the barges sail away from here.” Aloha.