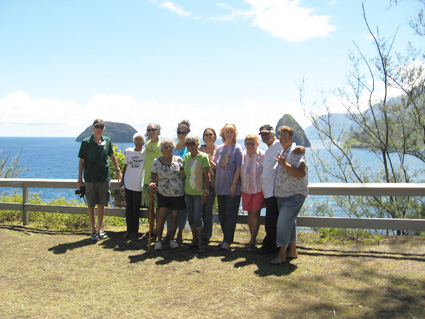 After six months of planning, reality set in as more than a dozen topside kupuna anxiously arrived at Kalaupapa as an August activity. For some it was a first visit, while for others it was a wet-eyed trip down memory lane or the joy of visiting of finding long-lost family.

Visitors’ quarters were set up for the two-night, three-day adventure and the welcoming committee and big-hearted sponsors Zianna Kaulia, Harry Arce, Kirk Dela Cruz and Luana Kaaihue truly outdid themselves in accommodating and honoring the kupuna with traditional Hawaiian values.

For kupuna, the peninsula tour and history with National Park Service staff Leanna Dixon brought educational enlightenment followed by a silent prayer for all the beloved people who endured to the end and have left their footsteps in the land. The ongoing efforts of the NPS to preserve the people’s rich history through their newest anthropological museum were met with heartwarming feelings of awe and approval from kupuna. Luncheon followed at the popular Oceanside Pavilion that included the combination of Shane Bush’s boat crew sharing a big pot of Portuguese Bean Soup.

Saturday night, a dinner at McVeigh Hall hosted by church members of Ka Hale Laa O Ierusalema Hou and others was “the frosting on the cake.” With what started out as a dinner for 40 delightfully resulted in the entire community of more than 100 in attendance, which was a long-awaited gathering for all present but most especially for the life-long residents. To everyone’s surprise, this triggered a most touching heartfelt words of welcome and appreciation from the venerable Gloria Marks, who recounted the days when the same hall used to be filled to capacity with excited residents filling the night with laughter and frivolity just as it was that evening. She concluded with a genuine invitation to topside kupuna for a repeat performance in the very near future.

“Sunset of Kalaupapa” followed by their “chalang-a-lang” songs and rhythms of the sentimental “backyard jam” years. Soon, off came the kid gloves exposing a bit of risqué all in the name of fun just like the good old days. Bedtime no longer became an interest as resident’s feet tapping, hand clapping, torso and head movements singing-a-long to tunes like “Pistol Packin’ Mama” and “Put the Dishes In the Sink” resulted in a most enjoyable time had by all.

Although this one journey has ended for kupuna, they will continue to travel that yellow brick road as their golden years promises them that if they grab ahold and hang on tight, only the best is yet to come.