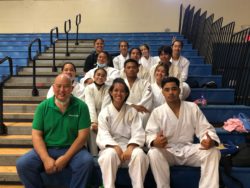 “Our regular season judo tournaments have wrapped up with the fourth tournament at Maui High,” said Kalei Roberts, judo head coach. “Some of our students had their first matches this week, and we have surely learned a lot from our competitors. We will be heading back to the mat this week to adjust our game plans and improve our techniques to be ready to compete in the MIL Championship tournament at King Kekaulike this coming Saturday.”