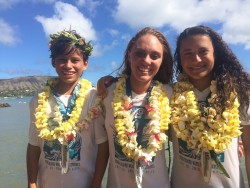 Team Youth in Motion were on fire and with every person they passed, the team got stronger and more determined to finish the race under 5 hours. Kamalo buoy was the home stretch and Alex’s paddling grounds proved to be the most fun with some epic glides and dolphins riding the bumps alongside them. Every change the kids did was smooth and fluid all working together as a team.

They finished in 4 hours 50 minutes, placing first overall in the mixed division, 58th overall out of 84. Watch out for these kids, they are the future champions of the channel!

Next came the Molokai2Oahu (M2O) race last weekend, a world championship race crossing the Kaiwi channel between Molokai and Oahu for a distance of 32 miles. For this year’s 19th annual crossing, the conditions were perhaps the most grueling conditions in the race history with light winds and a big south swell making the finish quite spectacular for those that rode the waves towards the finish line.

Alex again teamed up with Kalia, who is from Santa Cruz but her mom spent her summers with her grandparents (Cuelho) in Wailua on Molokai. They were joined under Youth in Motion by Lara Claydon from Lahaina, whose dad started Young Life with the Molokai Baptist Church. The kids represented Molokai well since Ekolu Kalama won this race back in 2010.

They placed middle of the fleet and second in the mixed division with a respectable time of 6 hours 39 minutes. They were also the only all Junior Team in this year’s event.

This was a dream to do this race for all three of them with the goal of going solo when they are older and stronger.  Alex was the youngest of the three but the veteran of the channel crossings, making this his third Kaiwi crossing. This was the second crossing for Lara, and Kalia is no stranger to long distance paddling, having paddled many grueling races on the mainland. Every change was fun, with the kids leaping off the boat with excitement and ready to take on their session of paddling as fast as they could.

In a strong international fleet, Team Youth in Motion put on a very impressive performance. The team plan to be back for 2016 and  ready to take on the next challenge of winning their division and place high in the overall results as they become stronger.