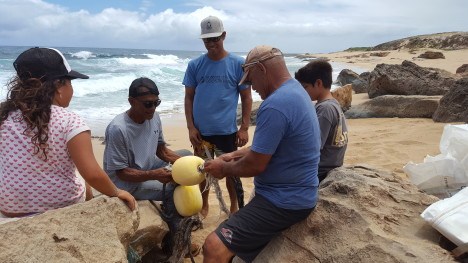 By Léo Azambuja, Special to The Molokai Dispatch

Molokai residents and volunteers picked up thousands of pounds of trash in the third annual Molokai Cleanup at Mo`omomi Beach Aug. 13. It was a considerable increase in weight collected compared to both previous cleanups at this pristine beach on the island’s northwest coast.

“This year, there was way more (trash),” said Kahi Pacarro, executive director of Sustainable Coastlines Hawaii, the nonprofit organization that put the event together. 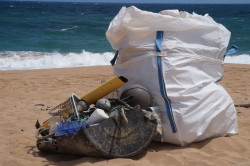 Large trash bags of rubbish left on the beach were picked up later by helicopter. Photo by Sarah Ching

Based on the loads taken away by trucks, Pacarro said he estimated there was roughly 12,000 pounds of rubbish collected from a 3.5-mile stretch, about twice the amount of each of the previous beach cleanups.

Traditional resource manager and educator Mac Poepoe has been fishing at Mo‘omomi his whole life.

“In the past, we used to have trash, but not like this,” said Poepoe, adding the rubbish washing up at Mo`omomi in the last few years is mostly made of plastic and nylon, materials that don’t decompose. Back in the day, he said, the trash washing up at the beach was mostly wood and metal.

Poepoe’s grandson, Kahaku Poepoe, loves to fish too and was also there to help to clean up the beach. It wasn’t his first time — just like his grandfather, he has participated in the annual event since its inception in 2014.

This year, there were about 200 people, including 35 Sustainable Coastlines volunteers from Oahu, helping to pick up rubbish at Mo`omomi. Pacarro said there were more people this year than in the prior year, but the rise in collected trash was mostly due to an increase of trash in the ocean. 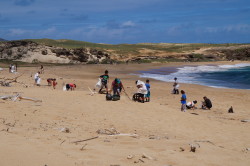 Besides helping to clear trash from the beaches, events like this can be used as a way to show the world what is happening and raise awareness of pollution, he said. Additionally, Sustainable Coastlines hopes to show volunteers that if they stop using plastic, they can have a positive effect on the beaches.

“The trash we are picking up on this coastline could be from anywhere in the Pacific Basin, could be from Japan, China, Taiwan, Philippines, Korea, even Russia,” Pacarro said. “And then you go to the other side, it could be from Alaska, Canada, West Coast [of the U.S.], and we even get stuff from Mexico.”

Sustainable Coastlines organizes about 20 beach cleanup events statewide each year, plus a cleanup at the Papahanaumokuakea Marine National Monument in the Northwestern Hawaiian Islands. The crew was stoked to be back on Molokai for the cleanup at Mo`omomi, and Pacarro called it their favorite event of the year.

“We do educational awareness in schools before each cleanup,” he explained, adding they reached out to nearly 500 students on Molokai in the week prior to the event. The nonprofit went to every school on the island, except for Aka`ula, which they had visited in the previous years.

The trash picked up at the beach was sorted by material type before being hauled away. All the plastic was removed to be recycled by cleaning company Method into cleaning products or by sports company Adidas into apparel, Pacarro said. 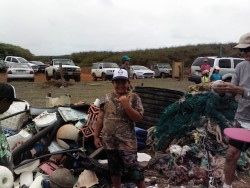 After the crew called it a day, mostly everyone gathered at the pavilion at Mo`omomi for a pa`ina with music and grinds.

Mo`omomi is a preserve managed by The Nature Conservancy and Molokai Land Trust. It is a 921-acre sanctuary home to 22 native plant species, nesting seabirds, green sea turtles and Hawaiian monk seals. Besides pristine sand beaches and coastal waters rich in fishing resources, Mo`omomi is famous for its vast sand dunes and lithified sand formations.