The Sport of Fighting 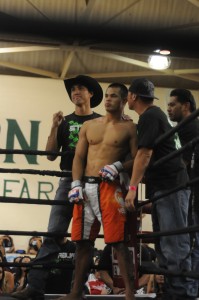 On weekday afternoons, 23-year-old Randen Abafo spends his free time fighting. Not on the streets, but for sport. In the warehouse next to Na Pu`uwai Fitness Center, he dons his gear –a simple pair of training gloves –and spends the next four hours jabbing, kicking, grappling and training with other members of Relentless MMA, Molokai’s only amateur mixed martial arts (MMA) club.

His hard work paid off on July 28 as Abafo won his third amateur fight at the Unorthodox Industries Championships VIII (UIC) Fight at the Lahaina Civic Center on Maui. The Molokai native faced Maui’s Adrian Pelayo for two rounds in the ring, winning the second with a technical knock out (TKO) after one minute and 20 seconds.

“Going in, I was pretty calm,” said Abafo. “My game plan was to punish his legs because he is a boxer, and then take him down as quick as possible.” Abafo followed through, grappling his opponent down to the mat first and then striking repeatedly –a technique many in the MMA world know as “grounding and pounding” –before the referee stopped the fight, securing his win.

“He fought a smart fight,” said trainer Beau Kikukawa, who was in Abafo’s corner through the fight. “He didn’t rush into anything and did the takedowns when he needed to –all his training paid off.”

Abafo is currently 2-1 in his amateur MMA career. The 155-pound contender started training with Relentless MMA about two years ago under the guidance of local pro MMA fighter Sale Sproat and trainer Beau Kikukawa. He made his amateur debut last year in The Battle at the Barn, a sanctioned MMA event hosting 15 fights held at Molokai High School Gym, in which Abafo won his first fight in just 21 seconds.

Although Abafo has no upcoming fights scheduled now, he said he hopes to start fighting at the professional level, which would allow him to make money from what he loves to do. Technically, anyone can “go pro”, as long as they find someone else at the professional level to agree to a match. Many reputable contenders will only fight competitors that will garner a lot of attention, whether due to skill or fanbase, according to Nate Harris, who also trains with Relentless MMA. .

“Everybody thinks it’s just fighting in a cage, but I look at it as a sport,” said Abafo. “It’s competition, just like baseball or basketball.”

Two other Molokai boys also fought and won at last weekend’s event. Justin Cook won after subduing his opponent in a triangle chokehold submission in the first round for his weight class, 125 pounds. Keoni Farm won by judge’s decision after two rounds for the 145-pound weight class. Both train on Maui under Kendall Grove with Central Maui Boxing, I & I Training Center and Team 323.

Abafo would like to mahalo Beau and Sale, sparring partners Jireh and Mark, Nate Harris and the rest of the boys at Relentless MMA, girlfriend Aolani, parents, brothers, Uncle Tom Manangan, Bad Ass Kennels, Straight Up, PIV, Hawaiian Mike, Kanani and Henry Bush for housing the team on Maui.

One Response to “The Sport of Fighting”