The Secret Lives of Monk Seals 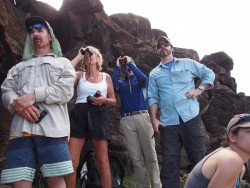 Scientists scan the beach for seals. Photo by Catherine Cluett.

A year and a half ago, scientists and community members wanting to learn more about endangered Hawaiian monk seals decided to try a new method of observation. Instead of continuing to speculate and make assumptions about the life and habits of monk seals – much of which happens under water – they decided to record it on video. Attaching satellite trackers and cameras known as “critter cams” to the backs of seals allows biologists, students and the public to gain insight into the largely obscured life of this endemic sea mammal.

“It leads them to the same conclusions that decades ago people observing monk seals came to before the advent of all this technology,” he explained. “You see seals near shore, you see seals on the beach, so you conclude that the world of monk seals is in that narrow band of ocean, and therefore you conclude that means there’s a lot of competition and a lot of overlap with what [fishermen] are trying to do.”

Once you put satellite tags on the seals, you get a different picture, he said.

“You see it’s basically their ‘driveway,’” he said. “That shallow nearshore area is what they have to do to get to and from their ‘bedroom.’”

While they do also feed from time to time in those areas, Littnan said the tracking data has revealed some significant information.

“From all the tracking we’ve done, all the dive records, much of everything they do is between 100 feet to 300 feet,” he said. “Some of these animals on Molokai are swimming 20 or 25 miles out to sea when they’re feeding on Penguin Bank [a subsurface island west of Molokai].”

The critter cams, provided through a partnership with National Geographic, have also helped scientists see what – and how much – monk seals are actually eating. Contrary to some perceptions, the animals don’t eat 400 pounds of fish per day, according to Littnan. It’s much less – about 12 pounds per day per seal.

“We know how far they swim and how much they’re eating – it averages to be less than a pound per square mile,” said Littnan, a number that’s been estimated thanks to the tracking and camera technology.

That data can be confirmed by Molokai students, who play an important role in the critter cam project. Littnan said 17 cameras have been deployed so far in the state, and he has worked with nearly 500 students around Hawaii to review and analyze hours of video footage shot from the back of monk seals. About eight of those cameras have been attached to Molokai seals, and local students from elementary through high school have participated in the project, according to Littnan.

The process is fairly simple. Biologists attach the critter cam to a seal, and the animal will go about its daily life for a few days. Using the satellite tracking device, the seal will be monitored and the camera removed. Littnan said before scientists view the footage, they make a copy of the video and hand it to a teacher. 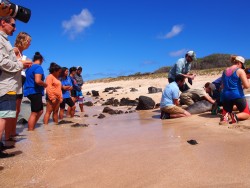 “So that’s one control so people are more comfortable in the knowledge that we haven’t manipulated the footage,” he said. “I’ll go back to classroom and talk to students about the role they’re playing, because it is a very important one. Before the class, they will have gone out to their family and friends to ask their perceptions about seals. At this point, this is about science. It doesn’t matter whether people like monk seals or hate monk seals. We want to understand what they know about monk seals that affects that opinion.”

Students will watch the video footage and inventory what they see, said Littnan – whether it’s the seal eating, swimming, interacting with other animals, sleeping, etc.

“Generally, what they see is quite boring – a seal sleeping,” he said. “That teaches the lesson that science can be tedious, but also that we make a lot of assumptions about what monk seals are doing when they’re underwater.”

Everyone shares and discusses the results, comparing what they saw with the perceptions that people had of seals, such as eating all the fish or feeding only in the areas where fishermen frequent.

“The intent is not to indoctrinate people to like monk seals, it is to think critically about these situations and that it’s not cut and dry,” said Littnan.

Last month, a handful of students, this time from Molokai’s Ho`omana Hou high school, got to experience the installation of a critter cam in person on the island’s west end.

“I want them to learn what’s happening with monk seals right now, about the different sides of the issue and the scientific process looking at data,” said teacher Nue Apiki.

Ho`omana Hou senior Keli`i Ka`ai said when he was young, he had encounters with monk seals when he was diving, but now, he doesn’t view them as a threat to fishermen or competing for ocean resources.

“I would tell people to watch out, keep your distance,” he said, referring to letting seals lie undisturbed when they’re sleeping on the beach.

Not only did the students get to watch biologists at work, placing the critter cam on a seal, they also got to take part in an exchange of information between international scientists.

With about 1,100 individuals living today, the Hawaiian monk seal is listed as endangered. But even fewer of their relatives, the Mediterranean monk seals living in southern Europe and northern Africa, are surviving, with currently about 600 individuals in the world. The Mediterranean monk seal, similar in appearance but different in habits to its Hawaiian cousin, is known as one of the world’s most endangered mammals.

Nine biologists from Greece, Spain, Portugal and Mauritania who study the Mediterranean monk seal joined Hawaii monk seal scientists on Molokai last month to learn more about the species and each other’s work.

Marcedes Munoz is a biologist from Spain who works with monk seals in Mauritania, a country on the northwest coast of Africa.

She said Mediterranean monk seals live in caves with groups of up to hundreds of other seals. But with less than 700 of the species left today, 250 seals in the Mauritanian caves represent a large portion of the total population.

“It’s almost half the population within one mile,” said Munoz.

Littnan said the group met to discuss the strengths and weaknesses of different scientific approaches, compare notes on the two monk seal species and how they can help each other and learn from each other.

For the biologists working in Mauritania, their activities are more hands-off, observing and monitoring the species, ensuring the animals’ habitat remains intact and doing non-invasive studies.

“If we protect the area, they have enough numbers that they can survive,” said Munoz. “They have different ways to do things [in Hawaii],” she said. “It’s good to see things from a new perspective.”

That perspective included witnessing Hawaii biologists and wildlife veterinarians wrangle a seal to check its health and place the critter cam on its back. Normally, they wait till the seals are asleep on the beach, but one of the two seals they selected for a critter cam last month, a young male, proved a lively challenge. Blocking his entry into the water, biologists gave him a low dose of sedative while they held him down to check his health and install the camera and tracker – a device Littan described as a “cell phone for seals.”

Students also got to see a seal up close for the first time and even touch his velvety flipper.

After watching the team capture the seal, check its health and attach the critter cam, Ka`ai said he has an appreciation for what biologists go through.

“It’s pretty cool – they go through a lot of work to do that,” he said.

All that work is in the name of science and better understanding the previously unknown habits of the species. The team also stressed that only trained and authorized biologists are permitted to interact with seals in this way.

“Scientists are very worried about the health of the ocean and certain diseases finding their way here,” explained Diane Pike, Molokai Marine Mammal Response Team Coordinator for the Monk Seal Foundation.  “You get one disease here and it could knock out the species… All of this is about saving the species… The science behind it is a means to [do that].”

Analysis of a blood sample of the young male last month will show what diseases, if any, he has been exposed to. Two blubber samples were also taken, one of which will be tested for exposure to contaminants like herbicides, fire retardants and other materials, while the other blubber biopsy will show the seal’s diet. Rectal, penile, nose and mouth swabs were also taken to test the seal’s health, said Littnan.

Over the past year and a half, the critter cam project has gone a long way to education people and involve the community, said Littnan.

“With every group we’ve worked with, with every animal we’ve shown them, the reality is far different from the expectation,” he said, adding he’s happy to meet with community members, students or individuals whenever invited. 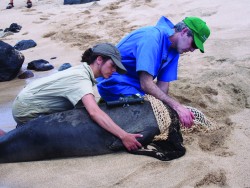 When it comes to interactions between fishermen and seals, he advocated for open communication within the local and scientific communities.

“How can I work with you to find out if that’s the same seal doing that every day you go out there,” said Littnan, “because if that’s the case, it’s bad for the fisherman but dangerous for the seal, and maybe we can intervene with that seal to stop that behavior or maybe move it somewhere else.”

For students on Molokai, critter cams have offered an opportunity to get involved in the scientific process, form their own opinions and help educate others, said Littnan.

“I think there’s been some big strides and getting these kids involved is the future,” said Pike.