The Road to Publication 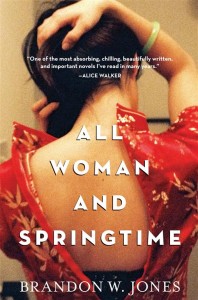 What first started back in 2009 as a cultural curiosity with the North Korean way of life, has culminated three short years later as a full length novel titled “All Woman and Springtime.” It is Molokai-based writer Brandon Jones’ first book, but gained rave reviews and international attention even before its recent publishing.

The novel, which recently made it to “O” Magazine’s 10 Titles to Pick Up Now list, follows two North Korean orphan girls who become victims of human trafficking. The title is a reference to how the main character, Gi, describes the unabashed radiance of her friend, Il-sun, as “all woman and spring-time.”

Jones said that his fascination with North Korean culture began when he noticed politicians and the media labeling North Korea as an “axis of evil.” This “dehumanizing speech” was very unsettling for Jones, and he saw it as his duty to start understanding not only the culture, but the psychology of what it would be like to live in such a society, he said.

“I craved a human story,” he said. “I wanted to present to my home audience a story that people could relate to.”

“It was more about the human experience for me than the specifics of North Korean culture,” Jones said in an interview with the Dispatch last year. “It’s more about how the reader can have empathy for what these girls are going through.”

Jones read numerous books, watched videos and combed the Internet to learn as much as he could about the region. He eventually came to the conclusion that “the humanity of North Koreans is often lost in the telling of North Korea.” With the novel, Jones sought to deal with real places, issues and situations while “deliver[ing] empathy to an audience that is…mostly unaware of the human details north of the Korean Demilitarized Zone (DMZ)”

“Part of the alluring narrative…is [Jones’] extraordinary creation of atmosphere, mood and tone, which do not act to ‘enhance’ the story, but rather become part of the story,” said Gregory Kahn, president of The Friends of the Molokai Public Library. “As a reader, I find this becomes a very joyful aesthetic experience.”

The 100,000-word fictional account has been described by acclaimed author Alice Walker as “one of the most absorbing, chilling, beautifully written and important novels I’ve read in many years.” Walker, author of “The Color Purple,” had read a draft of Jones’ novel and quickly introduced it to her agent, which eventually led to a deal with independent publishing company Algonquin Books, he said.

Jones and his wife Michele “Michi” Holley have lived on Molokai for the past 10 years.

“[Molokai] has taught me tremendous amounts about compassion and basic human decency, which has definitely factored into my writing,” he said.

A book launch celebration will be held at Kalele on Monday April 30, when Jones will be discussing his book, reading excerpts, and signing copies of his novel. At the event, guests may mingle with the author while enjoying a pupus potluck. “All Woman and Springtime” will be available for purchase at Kalele Bookstore, as well as digital and hard copy versions at Amazon.com.

“There are a lot of writers on this island so his journey of having his book published within three years provides inspiration for all of us,” said Teri Waros, owner of Kalele Bookstore. “We are so proud of him and just really excited to share this opportunity with him.”

“The whole thing is like a dream to me,” Jones said. “It’s only becoming a reality now that I’m leaving for a book tour.”

Jones’ book tour will span for over two weeks across mainland cities to Chicago, Denver, Seattle, Los Angeles and more.