The Rakefish Makes a Splash 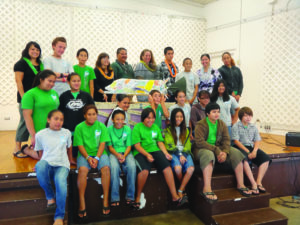 What fish is 4 feet long, has a rectangular body, can travel on land, and has helped bring awareness to ocean pollution across the nation? Answer: the Rakefish.

The Rakefish is not a real fish but a large fish-shaped sculpture with a broken rake as a fin. The “fish” has journeyed from A.W. Cox Elementary School in Guildford, Connecticut to teach Kimberly Ka`ai’s sixth grade class at Kaunakakai Elementary school about ocean pollution. Kaunakakai Elementary will be the sculpture’s only stop in Hawaii before continuing to its next destination in Washington, D.C.

Molokai parent Suzette Onofrio, whose niece attends the elementary in Connecticut, acted as a liaison in the process of bringing the Rakefish Project to Hawaii.

“It gave [students] an opportunity to…learn more about the problem of trash in the sea,” Onofrio said. “[And it allowed] kids to work and partner with other students across the country.”

Inspired by the Rakefish, Kaunakakai sixth graders were in charge of investigating the Great Pacific Garbage Patch, a gyre of trash (mostly plastics) in the North Pacific Ocean that experts say may be larger than the continental U.S. Ka`ai’s class contributed what they learned to a PowerPoint presentation that accompanies the Rakefish’s journey. In addition, the students signed a pledge to recycle and reduce waste, starting with a beach cleanup at Mo`omomi Beach last Thursday. 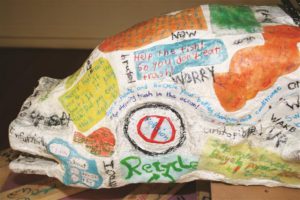 Students from all across the nation wrote messages on the sculpture. Photo Courtesy Michael Onofrio.

When asked what the most important thing they’ve learned from the Rakefish Project, sixth grader Kalei Hiwa said, “[To] stop littering in the ocean!”

“I’m proud because the kids are really taking the project to heart,” said Ka`ai. “I’m honored they get to be a part of this.”

Molokai High School junior Michael Onofrio has been volunteering his time to help with the project, compiling an educational video for the kids, setting up Skype video chat sessions with Connecticut students, and other technical support.

“Because we live in Hawaii, it is important that we take care of our beaches,” said Michael. “I just wanted to help.”

The project, funded by a grant from Guilford Fund for Education, has travelled to several elementary schools in other states across the nation, including Ohio, Colorado, Arkansas and California. Each school adds its own contributions both to the sculpture itself and to the accompanying PowerPoint presentation that highlights what each school has learned about ocean pollution. The fish’s next destination is Washington, D.C. and afterwards it will gain further recognition come World Oceans Day on June 9, according to Suzette.

“It’s all part of a learning process,” said Kaunakakai Principal Janice Espiritu in an assembly last week. “We have to really think of what we’re disposing into the ocean.”

“It’s exciting for the kids, and it is a creative way to bring attention to the garbage patch. It inspires our kids to do creative education,” added Molokai’s Penny Martin, education specialist for the Papahana Kuaola Lelekamanu Project, a Hawaiian cultural and environmental awareness program.

At a morning assembly last week, Martin presented the students at Kaunakakai Elementary with a letter from Governor Neil Abercrombie thanking them for “their commitment to our oceans and to this project.”

“Our ocean resources are of a particular importance as its preservation is fundamental to our economic growth and the maintenance of our high quality of life,” wrote Abercrombie. “Mahalo nui loa to…such forward thinking, environmentally conscious youth.”

For more information about the Rakefish project, please visit wix.com/jbern1/rakefish-project.