The Price of Play

Molokai High School’s athletes are members of one of the most unique high school sports leagues in the country—encompassing three islands and miles of ocean between schools. With a limited budget, teams have to make some tough choices each season over which games to attend, since most are a flight or ferry ride away.

“For other schools to compete it’s a bus drive away, not across a channel,” said MHS Athletic Director DeRouin. “… When we try to get [non-league] teams to come here, they tell you it’s a cost issue.” 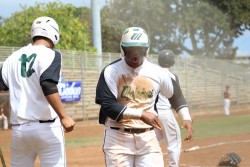 Baseball is one of the school’s most expensive sports, costing nearly $8,000 to send the team back and forth between Maui and Molokai during the regular season. Photo by Colleen Uechi.

Because the travel cost each weekend is unusually high, most of the athletic department’s money goes toward ferry and plane tickets, leaving room for little else in the budget.

This season, DeRouin is looking to alleviate that cost through a new fundraising campaign called “Adopt-A-Team.” Community members or groups can select a team of their choice and donate money to help cover the cost of travel. The goal is to help cover travel costs so department funds can instead go toward equipment and uniform replacement, which teams currently fundraise for on their own.

Ideally, said DeRouin, money from Adopt-A-Team would help get new uniforms for three teams every four years, a cost of $25,000. Uniforms for boys’ cross country are nearing four years old. Boys’ basketball uniforms are on their fourth or fifth year, and track uniforms could possibly be even older.

“At any point during the season people can make a contribution, or just donate a boat ticket,” said DeRouin.

The ferry is often the most effective mode of transportation for the high school, as two or three teams can simultaneously pile on the 149-passenger boat with their overnight luggage and bags of sporting equipment. However, because of the ferry’s schedule, teams sometimes spent whole Saturdays or Sundays after games on Maui or Lanai, creating extra costs for lodging and food.

It all adds up, said parent Kapua Falealii, who at one point had three of her kids playing two or three sports apiece at the high school.

In sports like cross country and swimming, where all athletes must run or swim the same course at the same time, Molokai almost never has home meets and often misses most of the regular season. When they do go off island, some talented runners and swimmers have to be cut from the travel roster due to limited funding.

“There’s 10 or 11 meets on the schedule and we go to two and then we go to MILs,” said swimming and track coach Jess Ford. “… It’s so crazy how restrictive the amount of travel opportunities is. It’s not Molokai High School’s fault. It’s just the way things are.”

As they do every year, teams fundraise to cover these costs, sometimes two or three times within the course of a three-month season. On Molokai, what DeRouin called “the capital of fundraising,” many efforts vie for residents’ attention, and athletes often find themselves asking the same people to donate again.

Falealii said she and her husband sometimes buy the remaining boxes of chocolates or cookies themselves just so the teams have the funding in time, then they slowly sell the products later on.

Sometimes teams or individual athletes qualify for the state championships late in the season, an exciting accomplishment but a logistical headache when it comes to booking flights last minute, said Ford.

“If we do qualify for the state meet, which we have been for swimming, that’s all out of pocket,” she added. “We sometimes have to fundraise the week or two before the meet and that’s really stressful.” 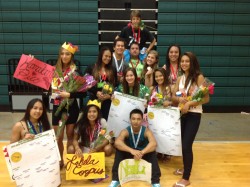 DeRouin explained that while Molokai’s switch from Division I to Division II nearly a decade ago was beneficial, it created extra travel costs. Against more equal competition, the Farmers began qualifying for state tournaments more often. To send 95 athletes to states during the year would cost around $11,400, according to DeRouin. Other neighbor island schools also have to scrounge up the money to travel to Oahu for state meets, but for Molokai it’s a case of déjà vu.

Eight-player football is Molokai’s most expensive sport, costing $8,400 to take 25 players and coaches on three trips. In the fall season, girls’ volleyball also racks up a substantial amount, costing $5,376 for 12 coaches and players to take four trips. Boys’ and girls’ air riflery costs $2016 apiece. Boys’ and girls’ cross country totals $2,352 for each team. Travel costs for MIL competitions in all 15 sports total $83,440. (Click here for full list of team expenses.)

“If they didn’t have to raise their own money, they could use it for preseason games and extend their traveling rosters,” said DeRouin, who’s coached both boys’ and girls’ basketball for Molokai. “… For what they do get [in funding] I’m very proud of the coaches and kids to be able to do what they do.”

“They’re putting in blood, sweat and tears. The only way they’re gonna know what they’re practicing for is if they race,” she said. “… There’s so much talent on this island. If they had access to the same number of competitive engagements as Maui kids they would totally be smashing.”

DeRouin plans to ask local and off island businesses for support, and added he’s available to speak about the program at community meetings. For more information on costs and how to Adopt-A-Team, Lee DeRouin can be reached at 567-6950 or lee_derouin@notes.k12.hi.us. Contributions can also be mailed to: