The Next Generation of Paniolo 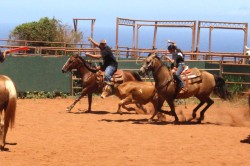 The paniolo tradition may appear to be riding off into the sunset, but a few young wranglers are taking the reins and carrying the legacy forward. For these Molokai boys and girls, it’s not just about rodeo arenas and competition; it is about the paniolo lifestyle – working on ranches, driving cattle and giving each other a helping hand.

“It’s a hard working life,” said 18-year old Kainoa Kamakana. “You don’t have free weekends. You barely have free time because you’re chasing cows out of the road or fixing fences.”

Kainoa sat in the stands of the Molokai Ranch arena with fellow paniolo Nicholei Galam-Dudoit, 18, and Alyssa Dudoit, 11. They just competed in the June 15 Keiki Rodeo, where Kainoa and Alyssa claimed the team roping win and Nicholei won the pole bending competition. The three grew up doing this, and they said Molokai’s young paniolo community is like a big family.

“There are two types of cowboys,” said Nicholei. “There are the prescription drug cowboys. They’re the ones who only like the arena and only do arena work. Then there are the cowboys like these out here – the Kamakanas and Dudoits and Duvauchelles. They can go fix fences, do annual cattle drives for the community, and they’re on call when somebody’s horse gets loose.”

Saturday’s rodeo, though a competition, was also an opportunity to bring together Molokai’s paniolo – young and old – who carry with them a spirit of aloha and kokua.

But despite the friendly nature of the event, there is still a lot of pressure on these young rodeo stars. Alyssa said competing against others is a challenge, and Nicholei added, “Pressure is the only thing that can break you in this sport.” 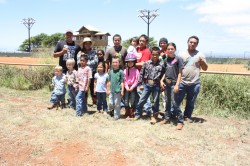 Kainoa said he will look over to his partner in the final moments before they unleash the horses and the steer for the team roping competition. He is looking for a nod – the sign that they are going to go out and do their best instead of quickly roping the bull.

“I don’t play any other sports because year-round I’m doing rodeos,” Kainoa said. “It’s a sport you have to be dedicated to. You can’t just show up and do well.”

These paniolo have dedicated their lives to the sport, and it is paying off. They compete across the state, and plan to continue entering rodeos as they get older.

“Alyssa’s the best cowgirl in Hawaii,” Nicholei said. “She rides calves now, and she’s going to be a professional.”

Alyssa takes her calf-riding skills on the road, competing at rodeos across the state.

“My dad wants me to be the first girl bull rider,” Alyssa said.

Kainoa said he will ship his horse to Hilo when he goes to college there. He added that entering rodeos is a good way to make money. Saturday’s young winners received a cash prize, and after the Keiki Rodeo, adults competed in the American Cowboy Team Roping Association rodeo later in the day.

Event Director Rex Kamakana said the turn-out for the rodeo was smaller than he’d like, and the competitors also expressed that they would like to see more supporters at the event. They encouraged the community to come to the arena July 20 and 21 for the next rodeo, either as spectators or competitors.

Regardless of the crowd size, he said what counts is keeping the kids occupied and continuing the paniolo heritage.

“It is part of the culture,” Rex Kamakana explained. “It’s been here many years, and we can start with the kids.”

It is clear the keiki understand what they are doing – that in roping and pole breaking, they are doing so much more. They are keeping a tradition alive.

“The cowboy legacy is a dying race, so our generation has to keep it strong,” Nicholei said.