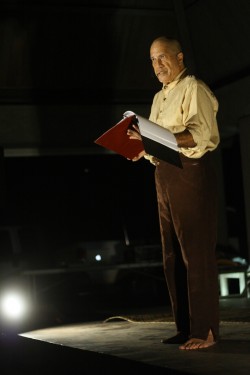 The stage was set and the lights dimmed at Kulana `Oiwi Halau as a piece of Hawaiian history came to life last Tuesday night. Brought to Molokai by the Maui Arts and Cultural Center, the performance, called “The Legend of Ko`olau” written by Gary Kubota, is based on the true story of Ko`olau, a man who evaded being exiled to Kalawao after he and his son caught Hansen’s Disease.

“It’s a compelling story and I think it needed to be told,” said Kubota, who is also a reporter for the Honolulu Star-Advertiser. “Hopefully it will give the opportunity for people to understand and be interested to study Native Hawaiian history.”

The performance illustrates Ko’olau’s life as a family man who fought a rebel militia that had overthrown the Hawaiian monarchy and enforced leprosy laws in 1893. The show’s webpage describes the one-man play as a story about “love and survival – love and devotion to family and the fight for their survival, despite the decimation of their Polynesian race.”

After 30 years of research and script writing, the show, performed by Kauai actor  Ed Ka`ahea and directed by Keo Woolford, made its debut on Maui Nov. 9, which kick started its statewide tour.

“[The tour] has been going well,” said Kubota. “We sold out on Maui and they gave us a standing ovation.”

It traveled to Molokai to give a free performance as well as a presentation at Molokai High School as part of a grant from the National Performance Network and Visual Artist Network to serve the community. The show attracted a full house beneath the Kulana `Oiwi pavilion.

“It was different seeing a one-man performance,” said audience member Ka`eo Kawa`a. “I think [Ka`ahea] got the message through, captured the emotion…and understood the culture and the language of the story.”

“I thought it was great and the presentation was perfect with the story,” said another attendee Carl Anderson after the show. “I can see that it’s still in progress but it didn’t seem to detract from what I saw.”

During the performance, Ka`ahea had read most of his lines directly from the script. He said he still has lines to memorize and the production has a few kinks to smooth out before the play appears in Ko`olau’s hometown on Kauai in March.

“This is a play in progress and we’re changing it every time—taking dialogue in and out,” he said. “We have some bugs to work out, but that’s why we come [to Molokai]—to work it out and perform in front of an appreciative audience.”

The next show is scheduled to appear on Hawaii Island in December and will show until March 2014. Ka`ahea said though he’s used to performing on Maui’s “big production” stage, he appreciated the Molokai audience and their support.

“The audience was warm, understanding and compassionate,” he said. “I like coming to Molokai because the people are friendly and it’s wonderful place.”