The Legacy of Dr. Aluli 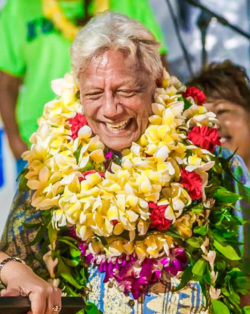 Molokai mourns the loss of a beloved doctor, Native Hawaiian healthcare advocate and activist who will be remembered for his infectious smile, kindness and generosity. Dr. Noa Emmett Aluli died on Nov. 30 at the age of 78.

Born on Oahu in 1944, Aluli was one of the first graduating class from University of Hawaii’s medical school in 1975, and chose to complete his residency on Molokai.

He went on to open his own practice at the Molokai Family Health Center, where he served the island for 46 years until his death.

“It’s not an exaggeration to say that Noa Emmett Aluli shaped the Hawaii we live in today,” reads a tribute released by the University of Hawaii.

“He pioneered a distinctively Native Hawaiian approach to health care in rural Hawaiian communities that he modeled for medical students whom he mentored,” wrote his life partner, Davianna McGregor, in a family statement following his death. “He believed that the health and well-being of each patient needed to be understood in the context of their ʻohana, their genealogy, their lifestyle, and their ʻaina. He emphasized specialized care of the kupuna, even making home visits. Filling a desperate need, he facilitated the opening of the Molokai Dialysis Center, raised $17 million to upgrade the trauma unit, and install a CAT scan machine at Molokai General Hospital to more effectively serve the island.”

He pioneered the Molokai Heart Study to address high rates of heart disease, diabetes and obesity on the island, turning to kupuna to help develop a diet of traditional ‘aina-based food that reduced risk factors for his patients and became a model of Native Hawaiian health shifts.

Perhaps his most noteworthy legacy is that of serving as a “catalyst for Hawaiian cultural renaissance,” according to McGregor. He was a founder of the Protect Kaho’olawe ‘Ohana, leading the movement to stop the Navy’s bombing of the island of Kaho’olawe that went on for 50 years.

In January 1976, he was one of a large group that organized a protest of the ongoing bombing. Most of the fleet was stopped by the Coast Guard before landing on Kaho’olawe, but Aluli was one of nine aboard the only boat to make it to the island. Though the Coast Guard soon came to arrest the group, Aluli and Molokai’s Walter Ritte managed to get away and spent three days surveying the island’s damage and avoiding unexploded ordnance before they were arrested.

Aluli played a key role not only in putting a halt to bombing the island, but its restoration for years to come. He helped oversee the cleanup effort, serving as chairman of the Kaho’olawe Island Reserve Commission and was instrumental in ensuring the island was returned to the people of Hawaii in 1994. He and the Protect Kaho’olawe ‘Ohana also revived the practice of cultural ceremonies including Makahiki, which is now once again celebrated across Hawaii.

“Dr. Aluli touched the hearts of thousands with his generosity, kindness, and aloha,” said his family’s statement. “He inspired generations of Hawaiians to stand up and be heard. A new generation is stepping up to lead the ʻOhana. He now leaves a big gap in health care for the island of Molokai that can hopefully be filled from among those he mentored.”

While many on Molokai will fondly remember his individual care and attention to all those he encountered, the magnitude of his reach and legacy is vast.

“Uncle Emmett leaves an indelible mark on the hearts and minds of the people of Hawaii, especially those lives he generously touched on Molokai,” said U.S. Congressman Kai Kahele in a statement. “His imprint and contributions will be felt for generations. He will be greatly missed.”

The Aluli family statement closed with his own words.

“We commit for generations, not just for careers. We set things up now so that they’ll be carried on,” said Aluli. “We look ahead together so that many of us share the same vision and dream.  To our next generations we say, go with the spirit. Take the challenge. Learn something. Give back.”