The Last Wave In 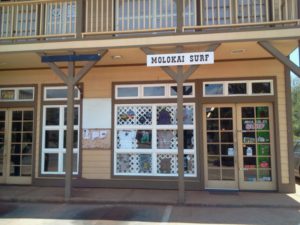 After 20 years of operation, the Molokai Surf Shop that has provided the island a local venue to purchase surfboards, surf gear and surf-brand clothing is permanently shutting its doors.

“It’s been a wonderful, wonderful experience, watching kids who used to come in in their hanabata days now bringing in their own kids,” said Aunty Caroline Jones, who has worked at Molokai Surf Shop for the past 18 years.

“All the visitors [to the store] give you so much love. They’re not customers, they’re family,” she said.

Owner Jerry Leonard said talks of closing shop – largely due to lack of sales in a faltering economy – have been buzzing around for a few months. Last week, he decided it was time and started to host a closing sale.

The closing sale allowed customers to purchase merchandise from the surf shop at discounted rates of up to 40 percent. By last Friday, the store’s stock was almost entirely cleaned out.

The Surf Shop, which Leonard started in 1992, originally across from Friendly Market, moved to its current location next to the former Subway in 2000. They employed a humble staff of three –Leonard himself, Aunty Caroline and Minka Nelson, who helped out on weekends.

Aunty Caroline has many fond memories over the past two decades. She recalls first moving into the new space 12 years ago, saying it was “just a hole.” Leonard installed flooring, walls and all the fixtures, “turn[ing] it into what it is today,” she said.

After a lengthy run, both shopkeepers say they have no regrets. Leonard is looking forward to doing some traveling and golfing without the stresses of working nine to five. Aunty Caroline said she is happy to be able to sleep in, play with her dogs and work on her garden.

The shop has been for sale but with no interested buyers, the emptied space will be available for rent.

One Response to “The Last Wave In”