The Hike of a Lifetime

Every year, about 2,500 people venture to hike the Appalachian Trail, a 2,184-mile long path along America’s east coast that begins at Springer Mountain in Georgia and ends at Mount Katahdin in Maine. Only 20 percent of these hikers actually finish the trail from end-to-end, becoming thru-hikers, or long distance hikers. Among these, Molokai resident Fred Clews, 66, who completed the trail earlier this year. 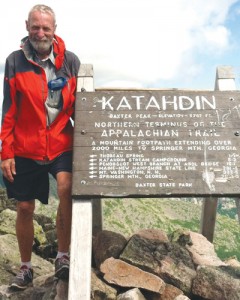 Clews, whose nickname amongst fellow hikers was “Granddad,” started the hike on March 3 at Springer Mountain in Georgia and reached the finish at Mt. Katahdin on July 10. While most hikers take around six months to complete the trail, Clews finished in four months and one week. As part of his strategy to avoid the humidity of the summer months, he planned to go at a faster pace. For the last stretch of the trail, he remembers beginning his day at 4 a.m. and hiking until the sun set, usually around 8 p.m. On average, he hiked 20 miles each day.

When asked if at any point he ever thought about giving up, Clews laughs.

“Not really,” he said. “It really took a lot of focus to not be attached to how much my feet hurt or how many rocks there were, but I always found something to stay occupied, whether it was singing songs or thinking about people I just met or the people who I would meet next.”

Clews said his favorite memories of his hike will be of the people he met along the way.

“There’s a huge support system that happens along the trail,” he said. “Four million people touch the Appalachian Trail each year, most are day or weekend hikers, and it’s always exciting to see them.”

He also came across “trail angels,” or people who would leave food and supplies in coolers alongside remote parts of the trail for hikers in need. One of the most poignant memories for Clews was on Easter morning, after he had been on the trail for about a month. He was nearly out of water and, with the next available water source 11 miles away, he had begun to get discouraged. Just then, he came across one of these coolers, where he was able to replenish his water supply. Being primarily concerned about only the necessities, he had almost overlooked the Easter eggs that were nestled in the cooler.

“We’re all so impressed with not just his physical capability, but mental capability to get up every morning and put one foot in front of another,” said Clew’s friend and Molokai resident Marcia Allison. “[Even] if you’re 20, that’s a big deal, but when you’re sixty-something, it’s a really big deal.”

Clews said he started training in July of last year. Though he had always enjoyed going for long walks, Clews had no former experience in hiking long distances or even sleeping outdoors. He started modestly, hiking five miles around Kawela every other day carrying a five-pound backpack, eventually working his way up to hiking 20 miles every other day carrying a 30-pound pack. Because he planned ahead, he was able to eliminate excess weight from his pack by hand-sewing most of his materials, including two sleeping quilts and a tarp. The pack he carried, along with food and water, never weighed more than 30 pounds.

“He was so engaged with getting ready to do this, hiking for eight hours a day and sewing all his gear,” said wife Connie Clews. “What he did required a lot of dedication and perseverance and he had to do it in his mind, and he did.” Over the course of the hike, Connie sent a total of 25 care packages from Molokai with shoes, socks and over 200 pounds of food, dropped at various pickup locations in towns along the trail.

Upon reaching the top of Mount Katahdin, Clews said he felt “very strong and a huge sense of accomplishment and relief that it was over.”

“I would do it again,” said Clews. “It was really a wonderful experience; it’s hard to sum it up.”

Clews said there is a definite possibility of completing another long distance hike in the future. He will attend a conference hosted by the American Long Distance Hiking Association (ALDHA) at the end of this month in Oregon to exchange stories with other thru-hikers.

3 Responses to “The Hike of a Lifetime”