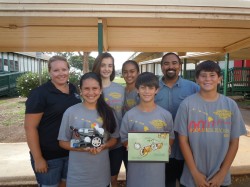 They beat 52 teams from around the state to accomplish that feat in December. Now, they’re in California showcasing an innovative invention they designed and competing for the title of national champions.

“If people were to predict where the state robotics champions would come from, Molokai probably wouldn’t be on the list,” said Molokai Middle School (MMS) Principal Gary Davidson. “They are truly some of the highest performing kids in the state.”

Since winning the county robotics tournament in November and the state event the following month, the Golden Eyes have received many honors. The Maui County Council presented them with a resolution, which stated in part, “The exceptional performance, dedication and team spirit of the Golden Eyes have brought pride and honor to the people of the County of Maui.”

Maui Electric Company highlighted their accomplishments in their customer mailings. The Office of Hawaiian Affairs noted their success during a ceremony at Molokai Middle School (MMS), and Congresswoman Tulsi Gabbard sang their praises recently before fellow politicians in Washington, D.C.

“The Molokai Middle School ‘Golden Eyes’ robotics team has shown what students can accomplish when schools and families encourage an interest in science and technology,” said Gabbard. “These talented students have worked so hard and have dedicated more than 600 hours to the development of their project. I congratulate the team for all they have accomplished already, and I wish them the best of luck at their upcoming national invitational.”

Golden Glasses
Their project, as Gabbard noted, represents months of hard work and dedication on the part of the six students and their coaches Kawika Gonzales and Jennifer Whitted, both educators at Kaunakakai School. In keeping with this year’s national First Lego League theme of finding solutions to help senior citizens, the Golden Eyes designed a pair of glasses called Golden Glasses. After their research showed over 77 million seniors in the U.S. suffer from memory loss, they developed glasses that would use facial recognition to identify people. In theory, the glasses would display names on a high tech retinal display screen and/or speak the names into an earpiece.

“Using the senses of sight and sound, these glasses would provide the senior with information that would provide them with a greater sense of security and thereby allow them to feel connected and engaged with the community,” wrote the students in a Dispatch article last year.

Gonzales said they might even look into patenting their design. Ironically, he added the team brainstormed the Golden Glasses just weeks before Google released their “Google Glass,” a wear-able computer that can interact with the Internet through voice commands.

Lily called it “a very good possibility” that their Golden Glasses will become a reality.

“This idea could help so many people,” said Noah of the facial recognition design.

Above and Beyond
In addition to presenting the features of their invention, students must also do a tech presentation and a “core values” presentation, which demonstrates their abilities to work as a team in various challenges. Competing teams have worked for months to design a robot to complete certain tasks that will be assigned by the judges.

These tasks will revolve around challenges faced by senior citizens, as represented on a Lego board, explained team member Lily. For example, one mission might be to turn off an “oven” by having the robot flip a switch on the board, because one challenge faced by seniors is forgetting to turn off their oven, said Lily. The students must pre-program their robot to complete these missions at the competition.

Gonzales said the team has also prepared a special performance for the judges as part of their core values presentation to share the Hawaiian culture. The girls will dance a hula while the boys play ukulele.

“We wanted to do something they would remember us by,” said Lily of the team’s planned bonus performance, which goes above and beyond the competition’s requirements.

That’s not the only way the six students have shown they’ve taken the project beyond robotics. Since last summer, they spent time once a week with kupuna at Na Pu`uwai’s Adult Day Care Program, singing, doing arts and crafts, completing puzzles and other activities with the seniors. It wasn’t a requirement for the competition; Gonzales said students volunteered because they wanted to,

The Competition
Noah, Erik, Katy, Kaitlin, Lily and Caele left for Carlesbad, Calif., Wednesday and will compete Friday, Saturday and Sunday. The trip is funded entirely through support from MMS and the Maui Economic Development Board. While in California, they will compete against 72 teams of students aged 9 through 14 from around the U.S.

The Golden Eyes say they’re “nervous, excited and scared to represent entire state.” But despite the pressure, they are keeping things in perspective.

“The important thing is we’re going for the experience,” said Lily. “We’ll try our best, but win or lose, we will have had fun.”

Kaitlin said what she’s looking forward to most is “being together and working our hardest.”

“They’re well prepared,” said Davidson. “I don’t want them to feel pressure — this is for themselves at this point.”

“Being from Molokai, we have something special,” said assistant coach Whitted. “We’ve overcome a lot of challenges with not many resources.”

“Given the opportunity, they will shine,” added head coach Gonzales.