The Garden of Easy 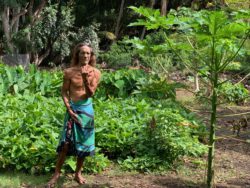 It’s been about 15 years since Nelson Puailihau—aka Easy, aka Honeyboy—gave up his rough and rowdy ways. Three years ago, he began to tend a parcel of land near Kilohana school. From the thicket of bananas, papayas, and taro to the expansive, impeccable lawn, the “Garden of Easy” is the expression of his deep desire to bring life and beauty to the ‘aina.

“Since I got clean and sober and turned my life around,” says Puailihau. “I’ve put my heart and soul into this land.”

Once overgrown with kiawe and other invasives, it is now meticulously tended.

“Lots of old timers pass by and see it. They are surprised by the transformation,” he says.

Born in Honolulu, Puailihau grew up on Molokai helping his grandparents, Eva and Sam Puailihau, on their land, both in town and on an eastside farm not far from his current location. Their farm had a spring and a productive lo’i kalo.

Helping in the yard and farm was young Puailihau’s kuleana. Work was always supposed to came before fun, but one day the urge to surf got the better of him and he hit the beach before doing his chores. When he came back, hungry, he looked in the pot for something to eat.

“Where’s the food, I’m hungry,” he grumbled. “Eat your surfboard,” said his tutu. It was a lesson he took to heart.

“I learned about hard work from my grandparents. I learned farming just by watching them—and by doing,” he says.

Growing up traditional, living off the land and sea, he also hunted and fished. He is said to have a “squid eye.”

“I also worked in the pineapple fields, the corn fields, and at the bakery,” says Puailihau. “Now I just work on the land. I don’t get paid, but I love it. As I saw the land transform, get more beautiful, I got deep into it.”

He is often seen sitting on the ground weeding the lawn while listening to music. Now that the lawn has filled in and is almost weed free, more time is given to clearing land and expanding his crops. Puailihau occasionally sells bananas and laulau, but often gives what he grows to friends.

“I have enough to eat and give away, and I make a few dollars. But it is not about making money. If I can make a few people happy that’s how my eyes like to see it,” he says.

His latest project is expanding into pineapples and vegetables like broccoli, onions, tomatoes, and peppers, to round out the diet. “They are harder to grow because of bugs and chickens, so I play that by ear.”

Puailihau takes the bus to town three times a week, where he is well known for making people laugh. He needs to take a break from the land or else he starts “getting creative,” meaning he comes up with too many projects. At 62, he says he needs to slow down.

“I take pride in what I do,” he says. “I am proud of myself, to be an example for our people that live on this island and pass by every day, to see how much beauty we can create and how we can live sustainably. But it is a lot of hard work!”