The Cats of Ke Nani Kai 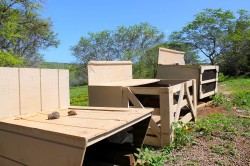 It runs like clockwork. Every morning at 7 a.m. and once again at 5 p.m., a cluster of cats congregate on an empty patch of gravel on the eastern end of the West Molokai’s Ke Nani  Kai Resort. There, they have all they require, including a hand-constructed litter box and wooden containers for food and water, which are religiously filled by a group of resort residents.

“I think they bring comfort,” said Vera Huff, reaching out to scratch behind the ear of a cat she calls Marilynn. Huff is a Ke Nani Kai (KNK) resident who volunteers to feed the cats each week. “These are beautiful, well-cared for, healthy cats.”

But it wasn’t always that way. Just seven years ago, according to Jody Canady, chair of the KNK Animal Control Committee, the 17-acre property was the stomping ground of nearly 75 feral cats.

“It was complete chaos,” said Dick Novack, resident and member of KNK’s Board of the Directors. “They were unhealthy, none of them were spayed or neutered and they would fight all night long. We were over-run by cats and nobody was doing anything about it.”

It all changed when a group of 12 residents came together to form an Animal Control Committee (ACC) that established humane population control, health treatment and a care program for cats on the property. After hundreds of hours of work and funds from out-of-pocket, today they have successfully reduced the population to a manageable size and haven’t had a new litter of kittens in three years, according to Canady.

Using a centralized feeding station and following a trap, neuter, and release method, Canady said they would begin trapping a day before scheduling a spay and neuter procedure with the Molokai Humane Society (MoHS). One by one, Canady and her team began collecting cats, enticing them with sardines into a humane trap.

“If a cat is hungry they’ll go to anything,” said Canady. “The trick is to put the food in, leave the trap open but don’t [set it to trap] so they get used to going inside to eat.”

The ACC would then drop off a handful of cats the following day at the MoHS for the procedure as well as a health check-up, pick them up later that day, and watch them over night before releasing them back on the grounds. About a dozen cats that were too sick to be treated were euthanized at the vet’s discretion.

The Cat Garden, a nonprofit cat shelter in Kualapu`u run by Jim and Carol Gartland and Aka`ula School volunteers, took about 20 of KNK’s 75 cats and the majority were adopted to homes on and off the island.

Today, 19 cats remain at Ke Nani Kai. According to Canady, all of them are spayed and neutered and are healthy residents of the area.

“I can’t believe we actually did it… and I’m surprised we didn’t have to put more cats down than I did,” said Canady. “What surprised me the most was seeing people come out of the woodwork that I would have never thought would be the type of people who wanted to get involved with helping the cats.”

This group of cats was originally introduced to KNK as a solution to a mouse infestation in 2000, according to residents.

“Every morning, the head of the grounds would go down to the pool and there would be 50 to 100 dead mice floating on top of the pool,” said Canady. “People had mice running up and down their curtains, inside, dying in between the walls, mice all over the place…it was awful.”

The cats that remain on the grounds serve a purpose to regulate the mice and rats that seek water at the resort during dry seasons, according to the residents who support their presence.

But not everyone shares the same fondness for felines.  Despite what Canady and others call success, a legal battle has ensued over the cats, spurred by small group of residents and board members who want to remove the animals from the property. An on-going litigation involving more than $1 million has caused feelings to flare at the small resort.

While the Dispatch asked for comment from those opposed to the cat’s presence, they declined to share their side of the story.

“The majority of the homeowners’ ohana does not wish to discuss this publicly during an on-going arbitration, and are resolving this issue with the help from a neutral party to ensure the solution is in the best interests of everyone in the ohana,” said KNK board member Brian Brooks.

Others think the feud is just a misunderstanding.

“[The ACC] does a wonderful job,” said grounds manager, Mike Jennings. “I’ve been here for three years and the cat population has decreased. I don’t think it’s such a big hulabaloo.”

Whether the cats remain on the property is still up in the air. However, the work that has been done to reduce their numbers has not gone unnoticed.

“I think it’s great that they have been able to reduce the number of cats to about one-third the pre-management numbers,” said Dr. Stewart Morgan, veterinarian for the MoHS, via email. “Mrs. Canady, Carol Gartland, Jim Gartland and others really worked hard to bring Ke Nani Kai’s cat numbers down.”

Soaring feral cat numbers is an issue experienced across the island, and the Kalaupapa community is in the beginning stages of their own management plan, adopting a similar approach to Ke Nani Kai but on a larger scale.

Morgan said due to Kalaupapa’s geographic isolation, there is little movement of cats to and from the peninsula, creating a better chance to control the population.

“I think a mixed approach of sterilization, adoption, and, if necessary, euthanasia is the most realistic method of humanely controlling populations,” said Morgan. “People have to remember that if trap, neuter, and release is going to work, the vast majority of cats in an area need to be sterilized. New cats that immigrate to a population also need to be sterilized, adopted, or removed from a population to have effective control.”

One Response to “The Cats of Ke Nani Kai”