The American Sugar Company and its Kaunakakai Wells

Eager to begin a sugar plantation after the Feb. 2, 1898 sale of the Molokai Ranch to the new Molokai Ranch Company, director Alfred W. Carter hired the McCandless Brothers partnership to drill test wells in Kaunakakai. Arriving on the Wilder steamer Helene in Kaunakakai with a crew of men and a complete artesian well drilling boring outfit on April 22, 1898, “Kimo” J. S. McCandless immediately commenced setting up the equipment three-quarters of a mile up Kaunakakai Gulch from the ocean. 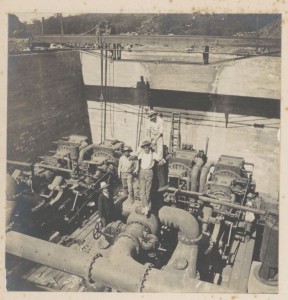 The first well drilled in Kaunakakai Gulch and the Worthington steam pump. This well is currently used by Monsanto. Photo courtesy The Bancroft Library, University of California, Berkeley.

Two wells were drilled 40 feet apart and 80 to 90 feet deep with an 8-inch casing and were completed by July, then used to irrigate 80 acres of cane planted on the flats below where Manilla Camp stands today. The salinity of the deeper well increased when pumped for two days and was abandoned, thus only the shallower well was utilized, which was pumped at 1 million gallons a day for over a year with no increase in salinity.

In early 1899, Michael M. O’Shaughnessy, a highly respected geohydrologist from San Francisco, was hired to design the water system for the budding plantation and investigate the water resources struck by the McCandless Brothers. A Worthington steam-driven pump was ordered and installed to lift water from a battery of 12 wells drilled in the gulch to 792 acres of cane that had been planted at Mahana and an additional 2,114 acres being prepared at Ho`olehua for planting.

Over the next few months five of the wells went dry and the salinity readings fluctuated in the remaining wells. Then a flash flood caved in the pump wells and in the process of digging out, removing then reinstalling the equipment, the integrity of the main shaft was damaged and salt water seeped in. While some of the leaks could be repaired others could not be located, and the more the wells were pumped the more salt water entered. In correspondence to the plantation manager C. Brewer & Co. dated May 29, 1900, O’Shaugnessy condemns the reckless manner in which the McCandless Brothers sink their wells: “The Kaunakakai station, instead of being parallel to the shore line is laid out at right angles to it, causing intense direct draft in a straight line to the sea, along the seam of Kaunakakai Gulch, which has caused the water to suck up from the sea under heavy suction, and spoil it for cane… I would suggest you remove them from the island, and try someone else who will act under proper instructions….”

The directors of the new American Sugar Company were forced to abandon these wells so as to keep the cane fields free from salt and enable future plantings feed by wells under construction in Kawela. The first – and last – crop of cane was harvested and shipped to Honolulu for processing and sale, and the empty fields used to feed the ranch’s cattle.