That’s a Lot of Candles 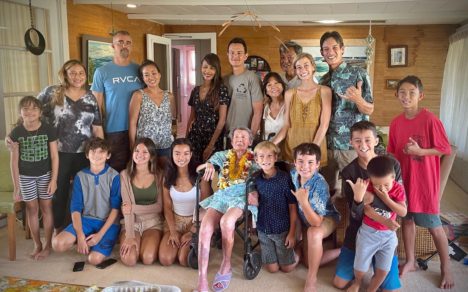 On Nov. 5, Marie Yamashita celebrated her 102nd birthday. That’s not something many people can say. In fact, staff at the Molokai Department of Health believe her to be the oldest person on the island.

The longtime Molokai resident “spent most of her lifetime getting to know our community through Molokai’s youth, many of whom are grandparents and great-grandparents these days,” explained Todd Yamashita, one of Marie Yamashita’s three grandchildren.

Raised in Waikiki, she was the first of her family born in Hawaii. In Kumamoto Japan, her mother Kikue Shikada had worked with their aunt as a local temple-keeper. After hearing about opportunities in Hawaii, she decided to take a steamer with hundreds of other immigrants to Hawaii. A graduate of the University of Hawaii, Mrs. Yamashita was finishing her senior year and in the hospital for asthma when Pearl Harbor was bombed. She remembers being sent home from the hospital, school was immediately canceled, and all seniors were automatically passed.

After graduation, she was assigned to teach on Molokai at Kilohana School on Molokai in 1940, and she had to ask where it was.

She remembers specifically that first, long drive from the airport. It was the “particular remoteness of Molokai” which initially struck her. A friend who had taught there told her “it wasn’t bad.” 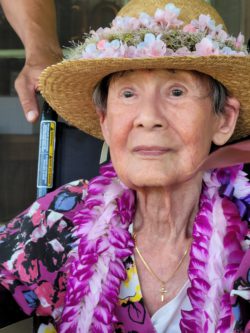 “It was bad,” she recalled. “We loaded our baggage at the airport and we drove, and drove and drove. I didn’t think we’d ever make it.”

“After all these years I realized that being removed from the hustle and bustle of Waikiki and placed on the little island of Molokai was in a way isolating for my grandmother,” said Todd Yamashita.

While it wasn’t always easy, Mrs. Yamashita made the island home with a can-do spirit.

“You have to be innovative when you come to a place like Molokai. There was no room for no-can-do attitude,” said Mrs. Yamashita.

After one year, she had met and became engaged to Henry Yamashita, who had come to Molokai in 1932. Much of the island didn’t yet have electricity, and Henry helped supply it to the rest of the island.

Mrs. Yamashita later transferred to Molokai High School where she taught English and revitalized the library, serving thousands of students in the decades to come.

As an educator, Mrs. Yamashita “was strict, but earned respect because she was fair and believed each student had the capacity for excellence,” said grandson Todd.

These days, Mrs. Yamashita is keeping up with the things she loves to do, including writing poetry and singing Hawaiian songs.

“When a person is 102 years old, gifts are a tough thing. What my grandmother has that is more valuable than anything is her memories with each of you,” explained Todd Yamashita.

As such, the Yamashita family is asking that friends send a memory or photo to celebrate the many relationships she has had here on Molokai.