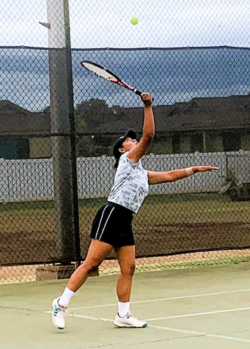 The Molokai High Girls Tennis team got a taste of the game last Saturday with a scrimmage with St. Anthony at their home courts in Kaunakakai. They won two out of three matches.

“Proud of the girls today against St Anthony,” said Head Coach Emilio Macalalad. “Girls played two doubles and one singles. Naiomi Cabreros won straight sets in singles. Alyssa Movick and Irish Oamil won the doubles match taking it to the third set as a comeback after losing the first of the three sets. Newcomers Malia Grik Lani and Danica Duffy lost their match, but we won two of three matches today. The girls hard work is paying off.”

The team will play next in the Maui Interscholastic League Tournament April 27-29.