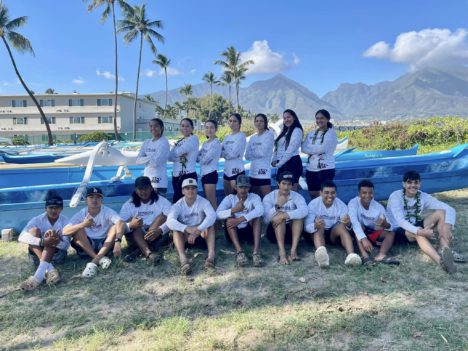 It was a sentimental celebration in Farmers sports this week as seniors were honored, athletes brought their teams to victory and the soccer and paddling teams ended their season.

Girls Basketball traveled to Maui for the Maui Interscholastic League Division II tournament. They first competed against Seabury, beating them with a score of 51 to 8. This win secured their spot for the HHSAA DII Girls State Championships, which will mark the Lady Farmers’ first appearance at states since 2016. The MIL tournament didn’t stop there. The girls competed against Lanai Pinelases for the championship, which they lost 62 to 31. This gave Lanai their first ever MIL basketball championship. Watch for the Lady Farmers as they travel to Oahu for state Feb. 1-4.

Boys Basketball celebrated their seniors as they competed against Lanai at the Barn. Friday night consisted of a close game between the Farmers and the Pinelads, with a final score of Lanai 43, Molokai 37. During the game and halftime, Molokai’s cheerleaders keep spirits high with cheer and dance. After the game, Farmer students and families celebrated the boys basketball seniors and cheerleaders. On Saturday, the rematch took place between Lanai and Molokai. This game ended in Lanai 54 and Molokai 43.

Continuing to celebrate Farmer senior athletes, the Lady Farmers soccer team finished their season with a senior game. On Friday, the Farmers took their home field to challenge Seabury. Seabury is the only other MIL Division II girls soccer team, which has resulted in Molokai’s girls playing six games against them this season. Friday’s game ended with a score of Seabury 7, Molokai 0.  The next day, the Lady Farmers played to honor their senior players, closing with a score of Seabury 10, Molokai 0. Molokai’s coaches celebrated their seniors and the girls recognized the strides they made as they finished Molokai High’s first ever MIL Division II soccer season in 15 years.

On Maui, the Farmers paddling team raced on Saturday, also recognizing their seniors. The varsity girls team placed sixth, varsity boys took third, and varsity mix B placed fourth. The varsity mix team A won second place, which led to a race off against Lahainaluna for states. Lahainaluna took the victory and the state spot.