At the end of the day, when students have left and the halls of Kaunakakai Elementary School are quiet, first grade teacher Bob Underwood picks up his violin and continues educating. He does not get paid for it, and he welcomes anyone with a desire to learn. But why would someone who spends all day in the classroom, constantly teaching, want to volunteer his free time doing that same thing? 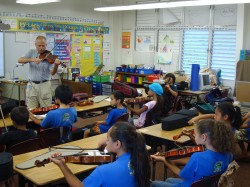 Underwood shares that love with budding musical artists each week. Keiki are joined by their parents and other community members as they take on some of the toughest instruments to learn. Underwood said the violin is a difficult instrument to play, and many kids give up too early.

“It makes you claw and scratch for every sound that comes out of it,” he said. “It’s relentless, and you have to be dedicated. For the kids who stay, it gets to a point where things start clicking, and that’s always a wonderful thing to witness and be a part of.”

It began when Underwood used grant money to buy instruments for his first grade class. He had experience teaching strings from his time working in the Denver, Colo., school system. In 2011, the classes became the Molokai 21st Century Instrumental Music program, taught after school and open to anyone on Molokai who wants to connect with music. Underwood teaches string instruments – violin, viola, cello and bass – and the trumpet, while fellow instructor Rob Stephenson teaches the woodwind family – flute, clarinet and saxophone.

The grant ended in April, so Underwood and Stephenson could no longer get paid for their work. This didn’t stop the two from sharing the art of music. They continued teaching as volunteers, and the classes will carry on through the summer and next school year.

Emillia Noordhoek of the Molokai Arts Center, which now helps support the 21st Century Program, said public schools on Molokai do not have music programs at all, so Underwood is providing a service that would not otherwise be accessible to children or the community.

“What he has done is affected the community and brought music to about 75 kids who wouldn’t have had the opportunity to play music or hear different kinds of music,” Noordhoek said. “I think it’s amazing the amount of time he puts into this.” 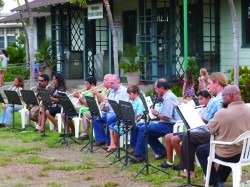 “I jumped in just to learn a little bit with them and then fell in love with it,” Yamashita said. “The girls have learned so much. They learned to read music and are being exposed to a new talent.”

Yamashita said she never thought there would be an opportunity on Molokai to learn these instruments.

Underwood’s students performed in two concerts this school year: one with Honolulu’s Gilliard String Quartet and another with the Honolulu Brass Quintet on May 21 that featured a group performance of Beethoven’s Ninth Symphony and an excerpt from Cabricio Italien by Tchaikovsky. The advanced strings students also performed an arrangement of Israel “IZ” Kamakawiwo`ole’s “Over the Rainbow,” which Underwood called a wonderful example of how music moves across cultures.

Underwood said learning musical instruments helps children develop motor and problem-solving skills. Developing a musical ear also makes learning foreign languages easier, and students become engaged as they learn the history of a piece of music. And as his class brings together young and old from different backgrounds, they form bonds that are rooted in music.

“I love how music connects people from all walks of life,” Underwood said. “It’s enjoyable to be involved in a situation where there are so many people working together.”

Underwood is about to begin his summer classes, which will likely take place at the Arts Center in Kualapu`u and Kaunakakai Elementary beginning June 10. The classes are open to the public, and anyone interested can call Underwood at 646-0733.

The 21st Century Music program is an independent nonprofit and receives grant writing assistance and teaching space from the Molokai Arts Center. Underwood said Kathy Sato at Strings for Tomorrow has also helped with supplies and equipment.