Teachers Speak Out for a Fair Contract

Molokai teachers are joining public school educators around Hawaii to raise awareness for their efforts of negotiating a fair contract with the state. Since July 2011, teachers have been working under a contract imposed by Gov. Neil Abercrombie, which included wage cuts and higher healthcare premiums. The Hawaii State Teachers Association (HSTA) union has been unsuccessfully trying to negotiate a contract with the state for the past year and a half, and teachers are frustrated with the lack of movement on a new labor agreement.

“We are trying to go through the proper protocols but the governor would prefer to mandate rather than negotiate,” said Tania Manaba-Will, the Kaunakakai Elementary School HSTA representative. “The national rhetoric is ‘put students first,’ but how can we put children first if we’re putting teachers last?” 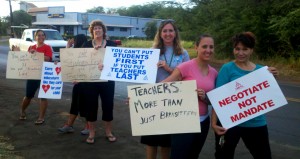 Molokai teachers from every school have been participating in weekly rallies, holding signs to raise public awareness of the situation.

“We would like to be treated fairly, that’s why we’re protesting,” said Manaba-Will. “We’re still furloughed after four years, and they’ve imposed pay cuts. It doesn’t make for a happy teacher.”

Tom Perry of the HSTA told The Garden Island newspaper last week that this was the first time in state’s history that a governor has imposed the state’s “last, best and final offer,” as the July 2011 contract has been called.

Underpaid and Overworked
Manaba-Will said while other public service and state workers, such as police and fire personnel, get paid overtime, teachers continue to volunteer their time above and beyond their paid hours.

“We’re not paid overtime, yet sometimes I’m at school until 8 or 10 at night — we work so much overtime,” she said.

She said teachers have received no pay raises in the past 10 years, and have, in fact, faced wage cuts. She said most Molokai teachers have to take a second or third job just to make ends meet.

“Public school teachers in Hawaii and across the country have continued to put the student first in spite of the financial hardships that have impacted us as a result of our struggling national economy,” said Kaunakakai Elementary teacher Bob Underwood.

In addition to being underpaid and overworked, teachers are also understaffed, according to Manaba-Will. She said the state claims a student to teacher ratio of 20 to one, but her Kindergarten class currently has 24 students and she only has an assistant for “a couple hours a day, and some days I go without.”

And while many people think furlough days are a thing of the past, Manaba-Will said they still exist for teachers. Furloughs were instituted in 2009 for all state employees, known as “Furlough Fridays” in schools. It reduced the school week from five to four days three weeks out of every month, and though Furloughs Fridays were no longer in effect as of fall 2010, Manaba-Will said now, furlough days just have another name.

“They’re calling it directed leave without pay,” she said, adding that furlough days are often incorporated into the school schedule in relation to vacations, such as starting break weeks a day early.

“We’re feeling demoralized,” she explained. “We want the public to know we’re working under these tight constraints.”

Negotiation Efforts
The HSTA has been working with the governor for the past year and a half, as well as the Hawaii Labor Relations Board, to resolve the issue and negotiate a contract. Several rounds of negotiations, bills and settlements have been offered by both sides, and an agreement has yet to be reached.

The HSTA even filed lawsuits against the state to protect teachers’ Constitutional rights to bargain, according to contractforthefuture.org, a website launched by the HSTA, devoted to the union’s efforts to end the dispute.

In a statement emailed to the Honolulu Star-Advertiser, governor’s spokesperson Louise Kim McCoy said the state is “committed to negotiating and remains hopeful that we can reach a positive resolution with HSTA.”

“It’s time for Governor Abercrombie to stop playing politics and give teachers a fair and equitable contract,” said Underwood.

One Response to “Teachers Speak Out for a Fair Contract”