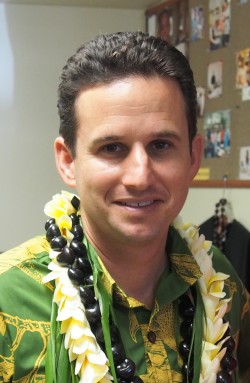 Last week, U.S. Senator Brian Schatz made a visit to Molokai and talked story with business owners, farmers, advocates and residents. Schatz is former Hawaii Lt. Governor, and was elected by Gov. Abercrombie to serve out Daniel Inouye’s term until the 2014 special election, for which he is running. As a senator, Schatz sits on three Senate committees: Commerce, Energy and Natural Resources, and Indian Affairs. Here are some excerpted questions and answers — some from a conversation with the Dispatch and others from community members.

Question (Q): What do you love about Molokai?
Schatz’s answer (A): It’s the sense of people depending on each other and real aloha. People really do take care of each other in this community and I think that’s an example for the rest of the state and world. They demonstrate what aloha really means.

Q: What challenges do you see as specific to Molokai?
A: The geographic aspect that increases the cost of everything. We need to make sure there is solid infrastructure for transportation, and over the long run, Molokai is going have to generate energy and have food security.

Q: Where do you see Molokai’s energy future?
A: I think right now the main priority is cost. People are paying three to four times the national average for electricity. So the main concern for Molokai residents is to try to find ways to drive down the cost. Clean energy can do that. Also because this island is such a small grid, we have to find ways to innovate and find more opportunities to bring clean energy.

The U.S. Department of Energy continues to be interested in Hawaii as a model and if you can articulate a vision where you can talk about an island being close to 100 percent clean energy, that would be a story to tell.

Q: What’s some recent legislation you’re working on?
A: [One thing] is some progress with Pres. Obama and establishing government-to-government relationships with Native Hawaiians.  Hawaiians are the only group that doesn’t have that…but there’s new hope through executive order. The president himself is thinking about it. It’s going to be difficult legally, but he’s giving it consideration.

Q: Molokai’s engine driver is agriculture, but we have a lack of water resources. Is there any way you can bring funding to help us capture added water resources?
A: This has to be the beginning of a conversation. We’ve got to work together and I’d be pleased to do that…There’s something called the Bureau of Reclamation and their purpose is water infrastructure. There are 14 member states. We are not a member state. We’re working on legislation to make Hawaii a member state of the Bureau of Reclamation, which would change our eligibility and allow us to compete for some of those dollars.

The nexus between water and energy is something people understood a couple hundred years ago but it’s something we’ve gotten away from. If you think about it, power plants are usually the biggest consumers of water, and what water supplies are often the biggest consumers of electricity. There’s very little conversation about how to do both more efficiently. The idea of pump hydro storage that would allow gravity flow irrigation and hydroelectric power is not a pie in the sky– that’s actually how it works on the mainland. We’re looking at getting serious on that question.

A bunch of studies were done by HECO [Hawaiian Electric Company] and MECO almost 20 years ago… they determined it’s technically totally feasible but the capital expenditure was too high. Maybe that’s true, but if you’re talking about a study from 1997 and now we’re paying four times the national average of electricity, and we’re talking about giant capital expenditures for energy infrastructure, maybe the math has changed. So I’m having a Water Energy Roundtable [this week] with a bunch of experts and that’s one of the questions I’m going to start to really dig into… It’s getting dryer, we have more water needs and we have water infrastructure from 150 years ago that hasn’t been significantly rethought.

Q: On Molokai, a discussion about genetically modified organisms has come to the forefront. Where do you stand on that?
A: The USDA [Department of Agriculture] has a role to play to make sure all crops are safe and the FDA [Federal Drug Administration] has a role in enabling consumers to make choices about what kind of food they eat. The other challenges and discussions having to do with land use are not the federal kuleana. As far as federal policy and disclosure, I’ve been a strong proponent of labeling [GMO products].

Q: How can your office help Molokai residents?
A: I’m not able to come to Molokai as often as I’d like — what I want to do is hear from [Molokai residents] about how federal government can be of assistance to you. We want to be as helpful and in touch as possible….I want to convey how much of a working relationship I would like this to be. I just worry on a personal level that I’m 5,000 miles away and therefore… we don’t think about working together on a daily basis. No problem too big or small for you to reach out to our staff. Let us help you wherever we possibly can… we have 20 staff members in HI and 20 in Washington, DC and their whole job is to help you succeed. But we can’t do it we know what you need, so don’t be shy, please reach out.