Taking up a Special Torch 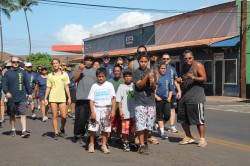 Special Olympics athletes and supporter make their way through Kaunakakai during the Torch Run May 4.
Photo by Laura Pilz

Special Olympics athletes ran through the streets of Kaunakakai Saturday morning with a torch carrier leading the way and police, fire fighters and other community members at their side. Fire trucks and police cars added to the excitement as the Saturday Market crowed cheered on Molokai’s impassioned athletes and their supporters.

Held for the first time on Molokai, the Troy Barboza Law Enforcement Torch Run aimed to bring support and awareness to Special Olympics, and the money raised through T-shirt sales stayed on Molokai to support local athletes. The event has been hosted on Maui by the Maui Police Department since 1990.

Molokai has 91 current and former Special Olympics athletes, according to information released about the run. It takes about $1000 to fund an athlete for a year, which includes participation in area and statewide competitions.

Jacob Spencer, a Special Olympics Molokai athlete, said he participates in track and field, swimming, basketball and softball. He said he gets better at each sport every time he plays.

Spencer and fellow athletes put their skills to work as Special Olympics participants competed against law enforcement in a softball game after the run. The athletes defeated the police, adding another victory to their records. 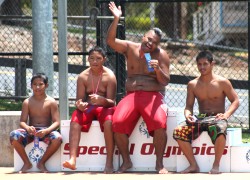 The softball game and Torch Run came after an April 21 swim meet on Maui that saw solid performances from Molokai athletes.

Kalahiki said when police Lt. Gregg Okamoto approached her about having the Torch Run on Molokai, she was excited about keeping the event local. The event has previously raised money county-wide with the Maui run. The Torch Run is also held around the country.