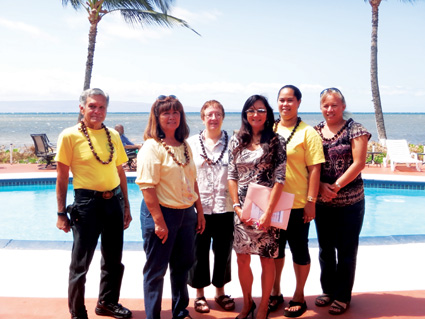 Of nonprofit agencies, Molokai Farmers Alliance raised the most money with $5,135, followed by Molokai Cancer Fund with $1,156, and Hospice Hawaii for Molokai with $1,130. Monsanto was the business that raised the most money with $2,500. All of the monies raised by these organizations are redistributed to local charities throughout the county. This year, an extra $10,000 from funds raised on Maui was added to increase Molokai’s distribution, resulting in $22,7000 allocated to a variety of nonprofit organizations on the island, according to Carol Reimann, Executive Director for the Maui Hotel & Lodging Association, who organizes the event each year.

Checks were presented to representatives from each of the charities that participated at a reception held at Hotel Molokai last week. Nonprofits seeking funds from proceeds of the Charity Walk must have submitted a grant application in May.

“Our industry remains committed to providing for and positively impacting the lives of the people of Maui County,” said Reimann in a statement. “It is our goal to impact many lives by supporting a variety of charitable organizations that provide valuable services and to ultimately improve our community.”

The Charity Walk is one of the largest single-day fundraising events in Hawaii. Statewide, more than $1.4 million was raised through walks held on Oahu, Kauai, the Big Island, Maui, Lanai and Molokai.

Next year’s Charity Walk will take place on Molokai on May 4.