Taking on the Big Blue

Since Leahi Camacho, of Kona, Hawaii, was six years old, she said she and the water have been inseparable.

“For as long as I can remember, I have been a distance swimmer,” she said. 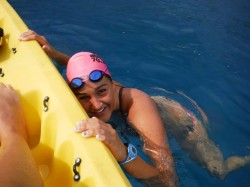 Now, the 17-year-old is attempting something not many have successfully accomplished: swimming the 26-mile Ka`iwi Channel between Molokai and Oahu. On Aug. 17 at 11 p.m., she plans to take her last steps on land for about 15 hours. Leaving from Hale O Lono, she will swim through the night for a planned landing the next day at Sandy Beach on Oahu. She hopes to become the youngest swimmer ever to swim the channel.

“When I got wind of this, I said ‘Say what?’” said Molokai’s Lloyd Yonemura, a swim official with USA Swimming. He said he’s been “calling her name” as an announcer at Hawaii swim races for the past 10 years, where she’s been a “top eight finisher for the past three years.”

“She’s so young I can’t believe it,” he said of her planning channel crossing. “I couldn’t think of walking 26 miles, much less running it, let alone swimming it.”

Camacho said in a brochure about her planned swim that by accomplishing her goal, she hopes to inspire others and “show them that no matter your past, there is never a feat too big to conquer.”

She said there are high costs associated with such a swim, including an escort boat and kayaks, flights between Molokai, Oahu and Kona, food, lodging and even a shark shield, totaling $7,440. Anyone interested in supporting Camacho’s effort can donate by sending her a check directly or making a tax deductible donation payable to Kealakehe High School with a memo noting Waverider Tri Club/Leahi Camacho.

Because she believes future athletes should have the chance to experience all they imagine and live through the elation of crossing the finish line without the worry of financial burden, she said she plans to give all remaining funds to the Talbert Family Foundation. The organization helps children and families take on the reality of being diagnosed with life threatening diseases and help them to live their dream.