Taking a stand against meth

Five girls from Ho`omana Hou High School saw first-hand how common meth was on Molokai, so they decided to take a stand. Partnering with the Hawaii Meth Project, they began a campaign to bring education and awareness to a community burdened by the dangerous drug. 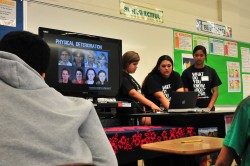 The middle school students grimaced as they viewed images of people with meth addictions who now have holes in their skin, teeth rotted out, thinning hair and sunken faces. They learned that these are the effects meth has on users’ appearances. The girls leading the presentation explained how the drug also leads to sexually transmitted infections, depression, paranoia, uncontrollable movements, hallucinations and heart and organ failure.

This may be heavy information for middle school students, but the girls from Ho`omana Hou said this is a key time to learn about the severity of meth use.

“We’re trying to educate the younger generations, because over here [on Molokai] it’s so easy to get [meth],” Nahaku said. “Purity [of the drug] is high and price is low, and that’s why it’s such a big problem here.”

The Ho`omana Hou students are receiving credits toward graduation for their efforts, but they are also passionate and knowledgeable about their cause.

“We never did meth before, but we watched people do it,” Nahaku said. “We looked the other way then.” 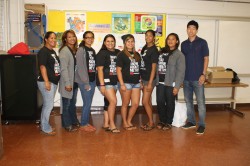 Nahuku added that their hope is that the students they teach are now powered with the knowledge to inform their peers and make a change.

Takeda helped prepare the girls to teach the middle school students, and he joined them in the classroom Monday, interacting with MMS students and helping the girls convey their message.

“Hearing the girls’ personal stories, I can see their passion,” Takeda said. “They did all the research and made the project their own. It’s encouraging to see. Smaller changes will hopefully make bigger changes.”

Molokai resident and project supporter Lori Abe said the lessons at MMS are just one part of the Ho`omana Hou girls’ campaign. They also set up an information display outside Friendly Market Jan. 31 and organized a sign waving by Rawlins’ Chevron Feb. 1.

Abe said the five girls, along with other local youth, stood along Maunaloa Highway with their signs “to take a visible stand against methamphetamine and send a strong message to the community.”

Takeda said the Hawaii Meth Project, which receives no state funding, relies on volunteer action to keep their mission going.

Information on the project and informational materials are available at hawaii.methproject.org.