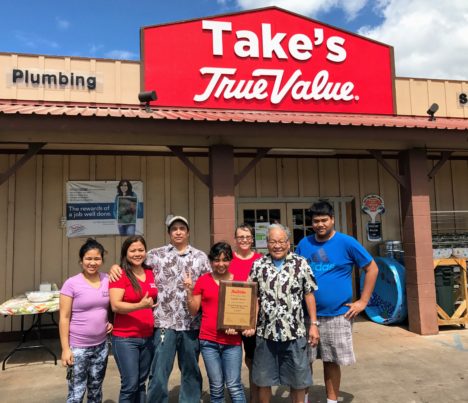 After a recent remodel of the store’s interior, Take’s True Value held a grand re-opening to celebrate the improvements with the community. The business opened on Molokai in 1950 and continues today, after nearly 70 years, under third generation family ownership.

“Originally my dad went peddling, from Maunaloa to east end, selling stuff from his car,” said second generation Take’s owner, Ralph Kanetmitsu. From delivery vending, his parents, Doris and Takeo Kanemitsu, decided to open a storefront, selling household goods, hardware, plumbing and electrical supplies and a variety of other necessities. Ralph said the type of merchandise hasn’t changed much today — they still “carry most stuff.”

The original Take’s Variety Store occupied the building next to Misaki’s, that currently houses Art from the Heart, Da Hotspot and Kalele Bookstore. Doris and Takeo rented the space, and Ralph recalls growing up in the store. He bought the business from his parents in 1974, and passed it onto his son Garrick in 2000. Ralph and his wife Carol continue to work at Take’s, along with Garrick and his wife Maricel, joined now by their own children sometimes working at the register.

The family business moved to its present location in 2007. They owned the land, and built the building to double the size of the previous space on Ala Malama.

Garrick said he always planned to continue the business. After graduating from high school in Honolulu and college on the mainland, where he majored in business, he moved home in 1992.

Both father and son credit the community with Take’s continuing success.

“Every year, we have a party for the whole island,” said Ralph of their annual holiday celebration and giveaway.

“We just try to give back,” added Garrick.

The store’s remodel, which began in late February and wrapped up in May, has allowed more aisle space for wheelchair access and increased offerings in plumbing, electrical and painting supplies. True Value, the business’ main supplier, assisted with the improvements.

“We’re really pleased to be in partnership [with this] third generation business,” said Matt MacFarlane, True Value retail consultant, visiting from the mainland. “It’s great to see the local community rally around… they [the Kanemitsus] have got the secret sauce to success!”

For two days last week, Take’s offered free chili and rice to their customers, as well as held prize drawings, to celebrate their re-opening.

“Thank you for the support all these years,” said Garrick to the Molokai community. “Without the customers, we can’t be in business.”