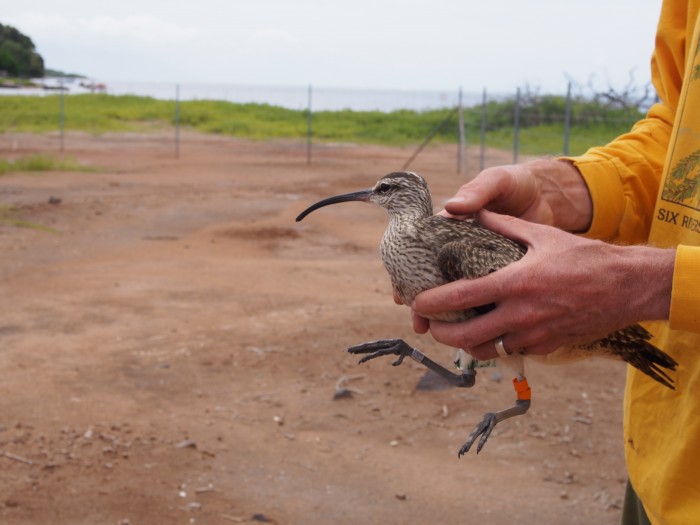 Wildlife biologist Dan Ruthrauff stood for 12 hours in Kaunakakai’s Koheo Wetland — blinded by wind and blowing sand — waiting for one of the world’s rarest shorebirds to show up. In his hand, he held a string that, when pulled, would harmlessly close a net over an unsuspecting bristle-thighed curlew — a pencil-legged, long-beaked, speckled brown bird known in Hawaii as the kioea.

Ruthrauff, a biologist with the United States Geological Survey (USGS) at the Alaska Science Center, was one of three wildlife scientists waiting patiently to capture kioea last week. Their goal was to place color-coded tags on their legs, along with geolocators that will provide tracking data on the birds’ migration routes between Alaska and the Pacific Islands, before gently releasing the birds. Though similar efforts have taken place on Oahu, this was the first kioea tagging on Molokai. The kioea is also the official bird of Kaunakakai, declared in 2011.

“The value of having marked birds is you can follow migration, estimate population sizes, and follow local movements, or how birds are using habitats [on Molokai],” said Lee Tibbitts , Ruthrauff’s coworker at the Alaska Science Center.

The wildlife scientists joined Molokai biologist and native bird expert Arleone Dibben-Young in a four-day effort to tag kioea on the island. While Molokai is the winter home to a maximum of 23 kioea, according to Dibben-Young, catching them was no easy task.

For three days, the trio waited without a single successful tagging. They carefully laid out 12-by-18-foot nets rigged with a delicate string trigger system. If a kioea stepped into the net, one of the biologists would pull the string to snap the net closed, then carefully restrain the bird and place the tags on its slender legs. On one leg, they fastened a geolocator and flag with an individual identification code of one number and one letter, on the other, two color-coded bands for easy visual recognition.

“We had a depressing few days,” said Dibben-Young of their frustrating start.

Finally, Saturday evening, the group tagged one bird. The next day, they got five in one net.

“I’d call it a smashing success [in the end],” said Dibben-Young, after Ruthrauff releasing the sixth kioea Sunday morning. “I can’t believe we caught five — we’re still in shock!” 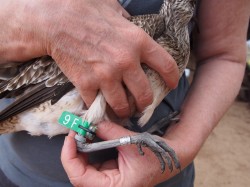 With tiny geolocators affixed to the tagged birds, the biologists look forward to the information this technology will provide. These geolocators don’t transmit any radio signals — they are light level data loggers, meaning they record the exact amount of sunlight experienced by the bird daily. Based on this information, researchers can calculate the latitude and longitude — or whereabouts within about 120 kilometers — of the bird each day, according to Tibbitts .

The geolocators can record data for up to 20 months, but have to be retrieved off the bird to download that information. This means next fall, Dibben-Young will try to capture the birds again to remove the geolocators.

By that time, Tibbitts said the birds should have completed a full migration pattern. Kioea spend summers in Alaska and winters on islands and atolls in the Pacific Basin. During molting season that lasts a couple weeks each year, the birds lose a portion of their feathers and become flightless, making them especially vulnerable to predators like rats, cats and dogs.

Fossil remains show that kioea were a historic bird in the Hawaiian Islands, but the species was once decimated by humans. It’s been illegal to hunt them in Hawaii since 1939, according to Dibben-Young, and while not considered endangered, they are protected by the federal Migratory Bird Treaty Act. They are now making a slow population come-back, but Ruthrauff said there are only about 10,000 bristle-thighed curlews in the world, and all of them live in the Pacific Basin.

“With that few, 20 [on Molokai] is a sizable chunk,” he said. “It’s important to have a predator-free area like this [Koheo Wetland].”

The Kaunakakai wetland area has been fenced since last August, said Dibben-Young, adding she’s noticed a big difference in the birds’ behavior since its installation.

“Dogs used to run through and the kioea would fly away,” she explained. “Now dogs are forced to go around the fence, and it’s like the birds sense there’s a barrier — they now ignore [the predators].”

Residents also notice regular individual kioea visiting the grounds at Home Pumehana, the athletic fields at Molokai High School, and other areas of the island. Dibben-Young said with the newfound ability to identify individuals with color-coded tags on their legs, researchers will be able to track whether birds travel around the island or stay in specific areas, with the help of observant community members.

Tibbitts said they will also be able to track whether Molokai birds intermingle with a growing population on Oahu, located primarily at the James Cambell Wildlife Refuge in Kahuku, where there are about 100 birds. There, Tibbitts and Ruthrauff have worked with the U.S. Fish and Wildlife Service to tag kioea.

In addition to attached colored tags and geolocators, the trio took small blood samples of the birds they caught to obtain genetic data. Tibbitts said that will help them determine which of the two genetically distinct breeding populations in Alaska they originated from, and also to see if the Oahu kioea are related to the Molokai group.

While five of the six kioea were bristle-thighed curlew, one was similar in appearance but a different species, called a whimbrel. These birds are very rare, according to the biologists, but this particular individual has been coming to Molokai for the past seven years, said Dibben-Young. She knows this because, even though the bird wasn’t tagged until now, the female followed the same behavioral patterns and locations each year.

With so much left to be known about Molokai’s kioea population, Dibben-Young, Tibbitts and Ruthrauff are looking forward to putting together some of the puzzle pieces with the help of the tags, geolocators and genetics. In the meantime, they will continue their catch and release effort to identify more curlews — even if it takes days of waiting.

One Response to “Tagging Kioea: Learning about Molokai’s Rare Shorebirds”