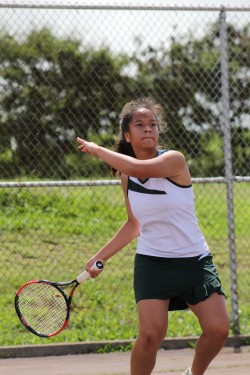 After a school year of Farmer athletics, spring sports are serving to ace the 2013-14 school year and represent the green and white all the way to the finish line.

Tennis
As MHS tennis returns for a second season under Head Coach Dean Chow, some are gaining their first court experience while others are returing to the team with high expectations to win “game, set, match” at the Maui Interscholastic League (MIL) Championships in April.

Last year’s dynamic duo, Pono Chow and Kamanu Pascua, earned the MIL doubles title, and received a spot in the Hawaii High School Athletics Association [HHSAA] Championships. Considered the best season in Molokai tennis yet, according to Dean, he said he’s confident this year’s team has potential to beat that record.

This season celebrates seven returning seniors and welcomes five freshmen as part of 13 players on the boys team and seven on the girls side.

Dean said he’s trying to gather numbers as other academic commitments have left the girls with an incomplete competitive roster losing by default in past games of the season.

“For the girls, we’re hoping to get them going on their serves and returns while getting them some exposure and experience in competition,” said Dean.

The team also welcomes five assistant coaches who will take part in practice and training. With about one coach to four players, that means each player will get more serves, returns, and volleys, which can make all the difference,  said Dean.

“You can already see the skill difference between our beginners and beginners on other teams,” said Dean. “That’s 100 extra balls our players are hitting during practice other players aren’t.”

So far, the team is off to a promising start, winning their first scheduled matches against Maui Prep and Lahainaluna. Their next match is scheduled March 28, at St. Anthony’s.

Boys Volleyball
With a few matches already under their belt, this year’s boys volleyball team is suiting up with two seniors, four sophomores and five freshman.

“Last year we had a great team and a lot of older players,” said second-year coach Hale Domingo. “This year, it’s totally different. I have one senior in his first year [in the sport], the other is in his third year…so the leadership is pretty much bouncing all over the place right now.”

“Last year, I learned anything can happen and the thing I need to work on this year is adjusting on the fly,” said Domingo. “Volleyball is such a quick sport. The game can just get away from you so this season I’m watching them play and adjusting our mistakes as they happen.”

So far in the season, the Division II team played off-island two weeks ago, competing against Baldwin, Lahainaluna and Kamehameha Maui. They also played at home this past weekend against Maui High. After four defeats, Domingo said it has been a good first few experiences for the boys and good way to see what they need to focus on for future competition.

“There’s a lot to learn, but I’ve noticed they’re very emotional,” said Domingo. “When things go bad, things go very bad quickly, and when they go right, they really go right. You can see it all on their faces.”

Domingo said as a coach, he hopes to help the team learn how to stay cool on the court and to keep optimistic even if the game doesn’t go as planned.

“I’m always trying to look at the bright side of things,” he said. “I’m going to keep encouraging them and control what comes out of their mouth, always keeping them positive.”

Excited for the upcoming season, Domingo asks the community to come out and support the team in the upcoming home games.The team will host a series of games in the Barn against King Kekaulike March 28, Maui High March 29, and Hana in April.

Track
Though last year’s track team didn’t bring any state qualifiers, the Farmers proudly represented Molokai in the MIL Championships, placing eighth on the girls’ side and ninth on the boys.

Twenty-two athletes make up the roster this year, with a good spread of athletes showing promise in high jump, discus, 300 hurdles, 400 meter, and 4×4 relay, according to Ford.

Narrowing this season’s focus on the shorter races, Ford said she hopes to bring a few mid-distance runners, who have ran the 3,000-meter in the past, down to the 800 event.

“The 800 is for the athletes that have more endurance but can start strong,” said Ford.

To prepare them, Ford said she’ll have the athletes do several repetitions of 200 to 300-meter sprints to boost their speed.

“Every season is a little different.” said Ford, who started coaching MHS track in 2009. “I’m always trying to change what I do because you always find new training techniques and different ways to coach a team.”

Though weather conditions cancelled a portion of last week’s Kamehameha relays on Maui, Ford said some of the top results of the weekend were Keao Ross, placing eighth in the 400 meter, and Rebecca Adolpho earning third in discus.

“I thought it set a good pace,” said Ford. “Everybody got to compete before it rained and for some of them, it was their first time racing on the tack. It was a good primer of what we need to work on in training.”

The next meet is scheduled for March 22 at Maui High School.