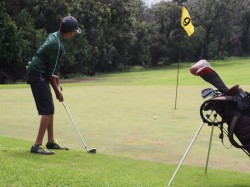 As the dust settles and winter sports begin to cool down, Molokai High School (MHS) spring athletics are just warming up, lacing up their spikes and practicing their swing for their pitches and putts.

Softball
The Lady Farmers are entering the spring season with hopes to not only match last year’s title as Division II Maui Interscholastic League Champions, but to also beat it by winning some games at the Hawaii High School Athletic Association (HHSAA) state tournament this year, said Coach Coco Augustiro, in her 10th year with the program.

The team began conditioning and prepping for the season in January, while starting organized practice in February. About 30 athletes came out for the sport and 18 made the cut, said Augustiro, for a roster of 13 returning players and five freshmen.

“With 18 girls, we need to find the right combination, strategizing where and when to play each player,” said Augustiro.

Although last year’s team consisted mostly of freshmen and sophomores, Augustiro said she wants to build on the skill set they acquired, get them physically fit, and finish with a strong season.

This season will bring extra softball to the Farmers’ home field as the MILs will be held on Molokai April 26 through the 28. Augustiro said the tournament may be held at the high school’s softball facilities, which are currently under restoration.

Until then, Augustiro said the team will be working on their grounders, practicing their pitches, and working hard to prepare for their first game of the season at Seabury this weekend.

Baseball
Farmer baseball is already under full swing as this year’s Division II team is wrapping up their pre-season 3-3 record, participating in a Baldwin tournament in March and coming in first at their pre-season tournament at Duke Maliu Park in February, said coach Mike McCutcheon.

This season’s make-up includes two seniors and four freshmen as part of the 20-player roster.

“I elected to keep everyone [rather than make cuts],” said McCutcheon. “I feel everybody should be given a fair shot because the camaraderie and keeping them out of trouble is a good thing.”

McCutcheon said he thinks the team is in good condition to take on this season after earning the MIL title and placing fourth in states last year. He said he expects to place at least third in the tournament this time.

“We’ll face some everyday challenges like keeping the group of kids close, no clicks, and make sure everybody understands it’s a team effort,” said McCutcheon, adding that they are a great group and “make my job really easy.”

After the Farmer’s close victory over the Spartans in the MIL Championships last year, McCutcheon said the team looks forward their match-up against Seabury April 4 at home.

“They have always been our toughest competitor,” said McCutcheon. “We look forward to that match and it will be great to play it at home.”

The team’s first game of the regular season is scheduled for March 31 on Lanai.

Boys Golf
Molokai High is competing with its first golf team this year in about 10 years (it’s been so long that no one’s quite sure.) Last year, golf was played at the school as an individual game with four players, and this year, the group of six boys plays both as a team and as individuals.

“It’s their first time playing as a team,” said Coach Darryl Rego. “Other teams have had teams for years.”

This year’s team is comprised of one senior, one junior, two sophomores and two freshmen.

“This is a young team but they’re doing well,” said assistant coach Ted Tokuoka. “They just gotta get the butterflies out.”

With two matches held on their home Ironwood Hills course so far this year, the Farmers have narrowly missed victory twice. Two weeks ago, they tied their first match with Seabury at 200 and lost their second 192-204.

Last weekend, they lost 198-204 to Kamehameha Maui in the pouring rain on Friday afternoon, followed by a 194-208 defeat Saturday morning.

Even though it’s their home turf, Ironwoods presents a challenge. Kamehameha Maui senior Lucas Park said he’s been playing golf for 10 years and called it “one of the toughest courses I’ve played on.”

Molokai sophomore William Dela Cruz, one of the four who played last year, described the team as “good fun,” adding they’re looking for more players to join the team.

The Farmers golf team has one more match at Ironwoods this Saturday against Maui Prep. Rego said the team will play seven matches total during the regular season, including during spring break. While the team may not have a good shot at the MILs this year, Rego said as individuals, some of the boys show promise to qualify for states.

“I’m a golfer at heart so it’s nice to see golf back at the school,” said Rego. “Hopefully it’s the start of something good.”