Swimmer from India aims to complete the Molokai-Lanai Channel 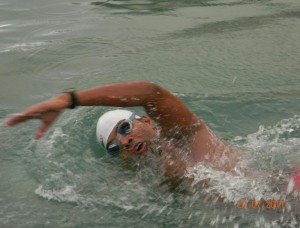 As inclined towards the water as islanders are, few Hawaiians can boast the ability to swim 10 hours non-stop. However, open water swimmer from East India, Amol Adhav, has swam the English Channel, the Bhagirathi River in India and the South African Channel to Robben Island. This week, he hopes to become the first man from India to swim the 9.3-mile-long Kalohi Channel between Molokai and Lanai.

The 32-year-old said it is his dream to swim in oceans all around the world. Originally from Bombay, India, Adhav has won endurance competitions in long-distance and marathon running as well as local swimming tournaments. He started swimming at the age of 12 and usually practices four hours every morning, after which he goes to his day job as an auto mechanic for Tata Motors in Bombay. In July of last year, he swam the 21-mile-long English Channel between England and France in 10 hours 56 minutes. 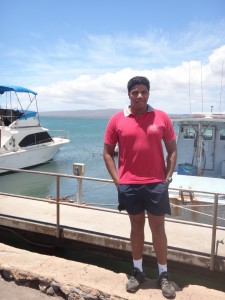 Adhav hopes to be the first person from India to swim the Kalohi Channel between Molokai and Lanai. Photo by Eileen Chao.

“Endurance has been his strength always,” said Adhav’s manager, Milind Gunjal. “His pulse rate is 52, which is very low so he doesn’t get tired soon. It is a natural gift.”

Before coming to Molokai, Adhav had the choice to swim channels off the coast in Calfornia in Catalina and Santa Barbara, but chose the Kalohi Channel because no one from India has ever swam it before.

“It’s nice that people are coming from all over the world to swim our channel,” said Jim Schelinsky, who owns Molokai BlueGoose B&B, where Adhav is staying.

As of the writing of this article, a date for the swim has not been set due to uncertain surf and weather conditions. However, Adhav insists he will make his attempt across the channel before Sept. 9.