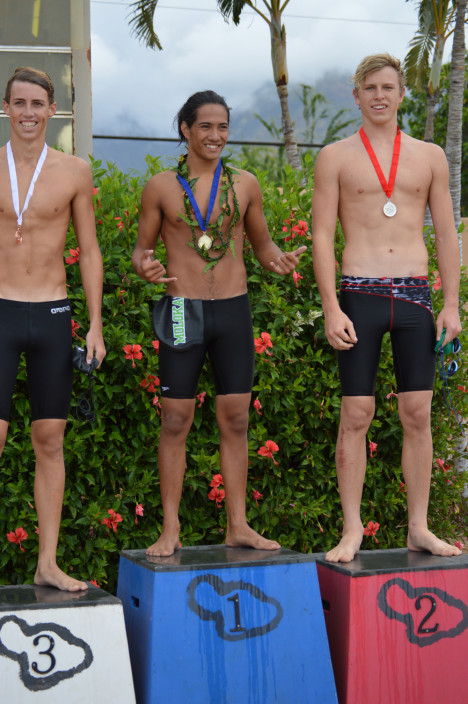 Molokai swimmer Keao Ross won last weekend’s Maui Interscholastic Championship in the 50 freestyle. Represented by just four athletes, the Molokai boys team garnered enough points to place third overall, making the team one of the strongest in the last decade, according to Coach Jess Ford. Ross will be the first qualified individual to swim at the state meet representing under Ford.
“The swim team took it up a notch this year and delivered a beautiful performance at the MIL Championships,” said Ford. “It We had many swimmers with breakout performances with some huge time drops in many cases. The boys team did excellent with only four swimmers…They had two third-place relay finishes on the boy’s side as well as our first MIL champion, Keao Ross.”
The MHS swim team will be represented at the state tournament in Hilo the second week of February with eight athletes. Four girls and four boys qualified for the state tournament at the MIL championships.
The girls will be represented in the 200 medley relay. Genevieve Kikukawa (backstroke), Michelle McGuire (breaststroke), Oceana Madani (butterfly) and Sabrina Curtis (freestyle).
”t’s been a pleasure to coach these kids this year they have been very dedicated and focused,” said Ford. “The girls’ team had a cumulative GPA of over 4.0 and with that standard across the board discipline and camaraderie was great.”
The boys will compete in the 200 medley relay and also the 200 freestyle relay. In the medley, Noeau Likua will swim backstroke, Kahale Naehu-Ramos will swim breaststroke, Ross will swim butterfly and Kaiea Dowling will swim freestyle.
Basketball 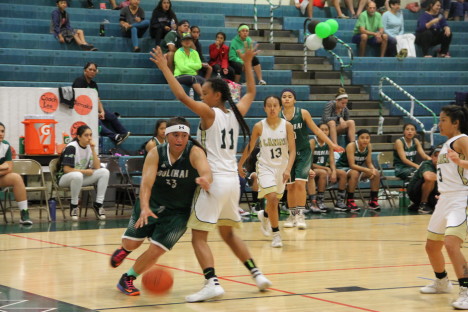 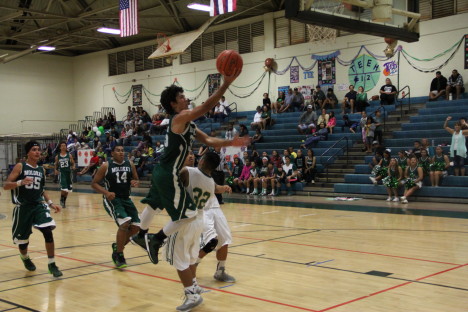 It was an exciting weekend of basketball at The Barn as Lanai traveled to Molokai to play the Farmers. Friday night was senior night for the girls and Saturday night was senior night for the boys.
The Girls basketball team completed an undefeated season at 12-0 with two victories 50-36 and 55-41. They will now head to Hana next weekend for the MIL championships. Head coach Lee DeRouin was pleased with his team’s performance.
“The girls really came out with great intensity both nights defensively and continue to grow on the offense end,” he said. “They all support each other and keep pushing to make the next play. I’m very happy for the seniors and the coaching staff will surely miss the hard work leadership and effort they bring each practice…they are a special group of young ladies”
Leaving for the MIL tournament on Thursday, DeRouin said the girls will have a busy week preparing to face Hana.
On the boys side, Friday night brought a loss but Head Coach Mike Kahale turned it into a learning opportunity.
“Friday night was a tough loss and actually quite humbling,” he said. “Lanai came to play and took it to us and bottom line just kicked our butts. Sometimes in basketball as in life that is exactly what you need. . . . A wakeup call!”
He said the team made some adjustments offensively as they prepared for Saturday’s game.
“…The boys showed their resilience,” said Kahale. “We were able to bounce back with solid defense, get some key buckets and pull out a win 47-44. I was glad that we were able to get a win for the Seniors in their final game in the Barn.”
The Boys championships will be held in two weeks. With Seabury as the number one seed, Molokai as the number two seed and Lanai as the number three seed, Molokai will play Lanai again in the first round of the tournament. Seabury will face Hana in the other tournament game.
Canoe Paddling
The Girls Canoe Paddling team placed second in the MIL Championships last weekend on Maui and will head to Oahu for the State Championships Feb. 4-6. Coach Stefani Hubbard was happy for her team and said they had a unique strategy for this final race.
“Unlike our other races, this was a defensive race,” she said on the MILs. “Knowing that we couldn’t catch Seabury in points, it became about making sure that we would hold onto our second place standings in MILs. This was also the last race on Maui for five seniors, so it was kind of a closing of a chapter for them.”
Wrestling
The wrestling team traveled to Lahaina over the weekend and is getting ready for their final league match on Maui at King Kekaulike before the MIL Championships in two weeks. The Farmers had two girls win their divisions along with two boys winning their divisions also.
In the girls competition Alexandria Simon won at 145 and Cendall Manley won at 168. For the boys Jayse Lalim Rillon won at 106 and Diego Dupont won at 152.