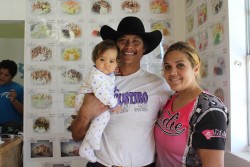 “Snow ice is not ice cream, it’s not shave ice, it’s not frozen yogurt. It’s like frozen cotton candy,” said Kalehua Sproat-Augustiro, who opened the shop along with her husband Maka Augustiro.

Unlike shave ice, which is ground into fine granules, snow is shaved into thin slices that, when layered, have the appearance of wrinkled tissue paper. Instead of adding flavored syrups to the ice, the flavors are frozen straight into the ice itself, a concoction of “fruit and juice bases mixed with milk,” which without toppings, amount to fewer than 150 calories a serving, according to Snow Factory Hawaii’s website.

Snow Factory has eight locations across Hawaii. Sproat-Augustiro explained that on trips to Maui, their family would stop at the shop multiple times a day. They eventually decided to approach the Snow Factory franchise about bringing a branch to Molokai. It took a couple of years before they could find the free time and the space to open this year.

“This is a pit stop for Molokai on Maui,” said resident Deidre Manaba over a bowl of cheesecake-flavored ice. “… It’s light, it’s refreshing, it’s unique.”

The family named the shop Sweet Evie’s for six-month old Evie, Maka and Kalehua’s fifth child and their only girl, who makes the rounds through the shop in the arms of various family and friends. The shop is tucked away behind Hometown Goods and has already attracted a steady stream of customers in the week it’s been open. 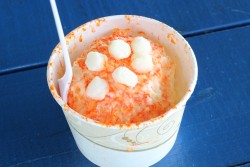 “People come like two or three times a day. It’s pretty addicting,” said head ice shaver Jing Kepa, who learned the art of snow shaving at one of Snow Factory’s locations on Oahu.

Sweet Evie’s boasts 38 flavors and 50 different combinations topped with a variety of sauces, fruits and sweets. Classics like Strawberry Cheesecake and Mint Chocolate Chip join local specials like Li Hing Mui Mango and Lilikoi Piña Colada on the menu. The “Sweet Evie Special” is a base of coconut ice topped with condensed milk, li hing powder and mochi.

“When I first tried [snow], I didn’t like it,” admitted Sproat-Augustiro. On her second try, she requested a customized order that would eventually become the Sweet Evie Special.

“From then on I was hooked,” she said.

Community members are also raving about the unique flavor and texture of the dessert.

“I will never eat shave ice again. This is better than shave ice,” said Nani Kahinu, who tried snow for the first time at Sweet Evie’s. Kahinu said her 10-year-old son is “addicted” and has been coming every day.

“He actually tried to finish up his chores earlier yesterday so he could get his allowance so he could come by and get another one,” she said.

Sproat-Augustiro comes from a family of business owners. The Sproats have partnerships with Kalaupapa Rare Adventure and Coffees of Hawaii’s Espresso Bar. Her father, the late Buzzy Sproat, led mule rides down the three-mile trail to Kalaupapa for over four decades. Her mother Marlene Sproat owned a sweet shop on Molokai for nearly 20 years.

Now, Augustiro and Sproat-Augustiro are branch managers of their own confectionary operation. Sweet Evie’s also offers gummy treats, cookies and exotically flavored popcorn from Primo Popcorn on Oahu that includes such flavors as Raging Crab, Wings n’ Ranch and Li Hing Pineapple. The shop’s tentative hours are Monday through Friday from 10:30 a.m. to 8 p.m., and Saturday from 9 a.m. to 8 p.m. A blessing, open to the public, will be held in the near future. For more information, email snowfactorymolokai@gmail.com or follow the shop on Facebook or Instagram.