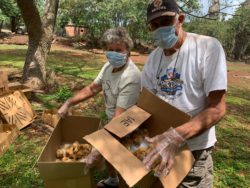 Viola and Weldon Wichman with their chicks. Photo courtesy of Harmonee Williams Pastrana

Molokai doesn’t have to decide whether the chicken or the egg came first, because another “first” has poised the island to potentially produce all its own eggs. Nonprofit Sust’aina ble Molokai is the first organization in Maui County — and likely the state — to have a Dept. of Health certified cooperative distribution model for on-island egg production.

Molokai currently imports more than 100,000 eggs per month, according to Sust’aina ble Molokai (SM) Executive Director Harmonee Williams Pastrana. Hand in hand with their efforts to foster consumption of locally grown produce, the organization is seeking to reduce the community’s dependency on off-island sources for eggs through a unique program that makes it easy for small farmers to produce and sell eggs.

“It’s insane how many eggs are brought into Molokai; it’s such a place of vulnerability for our island that we could fill,” said Jamie Ronzello, Sust’aina ble Molokai’s food sovereignty program manager. “By giving producers the resources to get started with egg production, they’re now going… and I think it’ll be really amazing to see more and more people buying local eggs.”

SM just received the DOH permit that allows commercial production to begin, and the first 36 dozen eggs are available for the first time through Sust’aina ble Molokai’s Mobile Market this week. Before SM sought this permit, there was no protocol for this type of production in Maui County — and after extensive research, Pastrana said she couldn’t find anyone else in the state that had done it, either.

“We were blazing the trail,” said Ronzello. “It really is something, personally, pretty remarkable for our island because it really hasn’t been done on this level before.”

Trained Producers
After getting an overwhelming interest in egg production for farmer training sessions, SM applied for and received grants in 2019 from USDA and Administration for Native Americans that allowed the organization to offer 12 spots in a three-day egg production workshop. The workshops, which began in January and wrapped up in June, were led by Asagi Hatchery, a family owned operation that is one of the leading laying chick supplies in the state and Pacific.

“Along with training, all participants also received all the essential supplies and information needed to set-up a commercial egg production business, including guidance on setting up their business, supplies included feed for the first several months [and] coop building materials,” said Pastrana.

Additionally, participants received 25 chicks, though a couple families chose to get fewer. Those who took the workshops are able to keep the eggs, sell or share them with family or friends, or sell them through the Mobile Market, an online local produce marketplace run by SM.

“We didn’t restrict people, it was really just about food security for the island,” said Pastrana, adding that with 25 hens producing about two dozen eggs daily, “there was no way a lot of families could eat that much.”

Egg-conomics and Benefits
About five of the 11 who completed the workshops have opted to sell through SM. While the goal is to help reduce the need to import eggs, Pastrana said that may be accomplished simply through encouraging residents to grow their own eggs or share the eggs they produce. If there’s an excess of eggs that aren’t sold through the Mobile Market, she said they also plan to approach local grocery stores to sell them as well.

SM buys the eggs from the producers at $.55 per egg, and sells them to Molokai residents for $7.50 per dozen. Though that’s more expensive than commercially produced eggs usually found in the store, Pastrana said the decision comes down to a preference for local and fresh — “they taste so much better!” she said. When sold through the Mobile Market, which also accepts EBT, SM received new funding to offer Double Bucks (two for one) for local eggs.

Patrana said even if producers don’t choose to sell through the Mobile Market, having chickens is a great compliment to home gardening, as chickens help with pest control and their manure makes beneficial fertilizer.

Participant Viola Wichman said chickens are the perfect compliment to their Ho’olehua tropical fruit orchard. They opted to built a “chickshaw” coop design with wheels that allows them to move their chickens down the lanes between the trees, eating the bugs and leaving compost as they go.

“They have been doing extremely well, it’s very exciting,” said Wichman. She said they had chickens years ago when they started farming but “didn’t know what we were doing.”
“When Sust’aina ble came along, it was a wonderful course for education, and they left it up to you what you wanted to do with these birds,” she said. “For our economy here, [it’s great] to buy wonderful eggs and know where they’re coming from and give us an opportunity to actually make some money on it.”

Wichman said from having chickens previously, she knows how expensive packaging can be and how much hassle it is to market eggs oneself.

“What [Sust’aina ble Molokai] offers us is the lack of overhead for us if we had to do all our own marketing, packaging, labeling, collection and health permits,” she said. “We’re guaranteed that we’re going to get $.55 per egg, whether or not they sell it. That’s a plus. I don’t have to go knock on people’s doors, sit at Saturday market, [etc.] It’s a nightmare when you have to think about getting paid for your product, it’s such a hassle.” 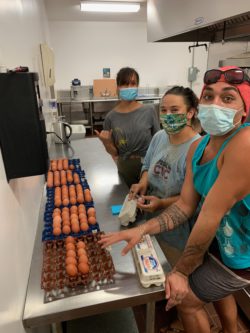 R-egg-ulations
The egg production process, for SM, is labor intensive and has involved hiring five part employees to assist with the new operation, which is led by Ipolani Ma’e. Eggs must be collected daily from the farmers, and washed, sanitized packaged and stored at a specific temperature in a fridge that is used only for eggs. Molokai Community Health Center has offered the facilities to make that happen, said Pastrana. DOH regulations mandate that eggs must be brought down to an internal temperature of 45 degrees F in a DOH permitted kitchen within 36 hours of being laid, Ronzello explained.

It’s a process that involves a lot of specialized equipment — and timing. Monitoring the temperatures of the eggs daily requires “sacrificing an egg a day to stick a thermometer through it” to ensure regulations are being met, said Pastrana. In addition, SM has to keep track of which eggs are from which producer with batch numbers labeled on the cartons, and every dozen eggs sold has to be traceable back to each farmer.

“The food safety plan developed by Sust’aina ble Molokai is exemplary to how any food operation should operate,” said Eric Nishibayashi of the Dept. of Health’s Maui division that worked with staff on the certification process.

“It’s really exciting to see this finally come to fruition for us,” said Ronzello. “It was a pretty in-depth process…. I feel we’re now in a position to provide community with eggs and do it within standards of DOH.”

With SM taking on the permitting and responsibility means farmers don’t have to deal with those hoops, said Ronzello. She also pointed out that anyone who has extra eggs can sell through SM as along as they adhere to the program’s protocols, even if they didn’t complete the workshop program.

“No farmer is going to do what we just did — it’s kind of insane what we had to do, and it wouldn’t be worth it for an individual,” she said. “So as an organization, we can take on that burden and legal aspects.”

The next series of workshops will begin in 2021, and SM will begin accepting applications for this program, as well as our others, including their Garden to Farm and internships, in December. Those interested in participating can email jamie@sustainablemolokai.org for more info.