The full moon on June 24, called a “super strawberry moon,” was captured here by Rick Schonely with his Kodak camera with zoom lens from Wavecrest Resort.

This month’s full moon is known as a supermoon, which occurs when the moon is at its closest point to Earth in its orbit, making it appear larger and brighter than usual. June’s supermoon was the last supermoon of the year.

The term “strawberry” moon sometimes refers to the pinkish hue the moon can have in late June as it sits lower in the sky and shines through more of our atmosphere, according to NASA. However, the name actually has more to do with the season of the year than the moon’s color.

“Some Native American tribes referred to this full moon as the Strawberry Moon because it signaled a time for gathering ripening strawberries and other fruits,” wrote NASA blogger Lance D. Davis. 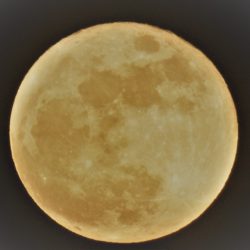 The strawberry moon usually refers to the full moon that falls around the summer solstice, marking the longest day of the year and the start of summer, which was on June 20.