Summer Trip to the Southwest

Editor’s note: Four Aka`ula School students recently traveled to the Southwestern U.S. and experienced some opportunities of a lifetime, including a helicopter tour over the canyon, visiting the Hopi Nation and seeing roaring waterfalls. Here are some stories from their trip. 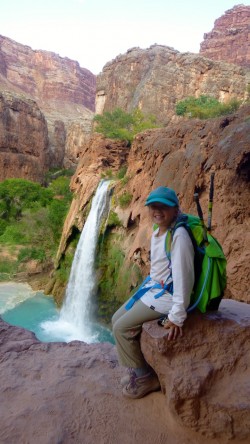 From May 31 to June 11, my classmates and I, along with our two great teachers, traveled through the Southwestern U.S. Those 11 days went by so quickly. Along the way, we ate some sensational food, saw some fantastic scenery, met really friendly people and shopped for a variety of cultural gifts. The entire trip was marvelous, but the most superb highlight for me was hiking into Supai Village and Havasu Falls.

We got up at 4:30 in the morning for the three-hour drive to get to the starting point of the hike. Before we started down, we got our walking sticks ready and put on a lot of sunscreen. It was awesome hiking down because the views were spectacular. The colors and the heights of the cliffs against the blue sky were so jaw dropping that it didn’t seem real to me. On the way down, we had to step aside for the mules that were carrying supplies to the village. Our guides, Janel and JayCee, were really nice. They helped us hike to Supai village, giving us a lot of breaks along the way. When we were getting close to Supai, a big, beautiful river flowed quietly by the side of the trail. We arrived at Supai seven hours after we started.

After hiking to Supai Village, we started walking the three extra miles to our campsite.  Everyone was exhausted when we got there. The next morning we woke up to the beautiful sound of the roaring waterfall and we couldn’t wait to go swimming.

After a pleasant breakfast, we headed for the falls. It was a breathtaking image that pictures could never really capture. We swam all day. The water was a marvelously radiant color of turquoise and baby blue. While we were swimming, Janel and JayCee put up a “slack line,” a type of tight rope.  We got to try it out. It was hard to walk across, but we got better quickly. After another exceptional meal at camp, we went on a night critter hunt. We found a lot of red spotted toads. We even found a tarantula hole!

The next morning we got up early so we could walk to Supai village to catch a helicopter out of the canyon. When we finally got on the helicopter, it was very exciting! We floated out of the canyon! The 10-minute flight compared to the seven-hour hike was a big difference. In the helicopter we could see the beautiful scenery and the trail that led down to the village. The trail looked extremely long.

Our hike to Havasu was exhausting but very interesting. I was so grateful that I even got to go on this trip. We weren’t planning to go to Havasu, but our adventurous teachers found a way to fit it into the itinerary of fun. I am so thankful to them, my family, friends and others who helped make this trip possible. 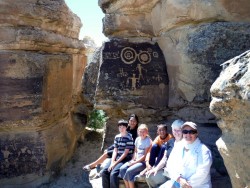 Second Mesa, in the middle of the Hopi Nation, was our first stop after landing in Phoenix, Arizona. It wasn’t exactly “green” in that pretty way, but it was just as pretty as everything was laid out before us on the horizon.  We stayed in this nice hotel that is owned and managed by the Hopi. There were many merchants at the hotel, and we bought some kachinas. To the Hopi, the kachinas were beneficent, spirit beings that came to this world with the Hopi from the underworld.

We also went a trading post that Miss Lukonen and Miss Newberry had been to before. Janice and Joseph Day are the owners of Tsakurshovi Trading Post. There were baskets, kachinas, blue corn, earrings, necklaces, bracelets, and rings for sale.  We brought a few gifts to give the Days and they gave each one of us a shirt that said, “Don’t Worry, Be Hopi.”  It was a wonderful gift. Joseph made a call to a friend of his, Marlinda, and she and her friend, Jay, took us to see an area filled with petroglyphs and pottery shards. I have to say, Hopis and Hawaiians have a similar history. They believe Hopis traveled around the world and even reached Hawaii, which is why we have a similar history. As if to prove it, many people thought I was Hopi.  When we were heading out of Hopi, we stopped at the Hopi radio station, Radio KUYI.  Radio KUYI lets guests broadcast, so we recorded a Hawaiian greeting. We also selected songs for the next live broadcast.

My favorite place, besides the hotel, was the petroglyph site. It was so peaceful there, so quiet. My second favorite place was Radio KUYI because that was the first time I was ever in a radio station. Last, but not least, I liked Janice and Joseph’s trading post. Their shirts were awesome! Everything in the store was awesome and they were so nice and helpful! I really hope I get to go back to Hopi one day. 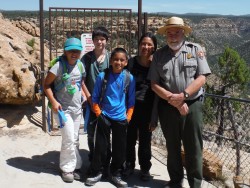 The first time I went to the mainland was this past June.  I went with some of my schoolmates and my teachers.  We went to national parks, mesas and ruins. We drove hundreds of miles across the four states.  Three of the places we went to were Mesa Verde, Balcony House and Four Corners.  Balcony House is on the side of a cliff at Mesa Verde.  There were many steps and ladders we had to climb and there were three tunnels we had to crawl through.  Mesa Verde means flat green top. When we went to Four Corners we stood in Arizona, New Mexico, Colorado, and Utah all at the same time.  I saw my papa and my grammy there and I got my sister a flute and I ate watermelon.  Those were three of the many places we went to on that trip.