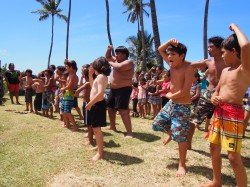 If you visited Ali`i Fishpond last week, you would have found a group of students twisting ti leaf lei using their toes as anchors, speaking to each other quietly in `Olelo Hawaii under the branches of a hala tree. Meanwhile, another group of students learned lomi massage techniques, while seated beneath the shade of the hale overlooking the fishpond, giving each other treatments.

This was the third annual Kula Kaiapuni Kauwela summer school, a Hawaiian immersion program for one month in June and July. This year, for the first time, students spent one week at Ali`i Fishpond as part of the program.

“We don’t want it to be summer school,’” said Loke Han, a Kualapu`u School teacher and this year’s program director. “We just got out of school. We want it to be more hands-on learning.”

In past years, the camp has been more academically focused, she said, held exclusively in a classroom setting at Kualapu`u School, with occasional field trips.

“We really wanted to get outside to do things like learning… lomi lomi, lei-making and art,” she said.

And that’s exactly what this year’s program has offered for one out of its four weeks. Organizers were able to partner with nonprofit Ka Honua Momona (KHM) to hold the camp for five days at Ali`i Fishpond, where kids have been pulling mangrove, pounding poi, fishing and engaging in other hands-on learning outdoors. 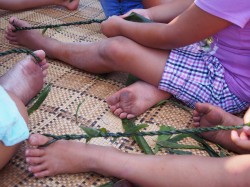 “I love having them over here – it’s something really good for our fishpond,” said kupuna Mervin Dudoit, who works at the fishpond with KHM. “It’s important for them to get involved so they can teach their parents. I love looking at these kids – I feel so good when I see them.”

For seventh grade attendee La`a Paleka, she said the camp refreshed her memory of the Hawaiian language.

“It helped me to not forget Hawaiian in the summer,” she said. “This week, I learned about connecting with the land.”

All instruction is in Hawaiian, and though more than half of the camp attendees are Hawaiian immersion students, some jump in knowing very little of the language. Fourth grader and second-year participant Kirakai Yamazaki-Gray said she knew only a few words from learning hula.

“Last year I was really scared to come because I wasn’t comfortable [with the language],” she said. “Now I know more Hawaiian…. [The camp] is really fun. You have to be aloha and be happy here.”

Wepiha Te Kanawa, a 21-year-old from New Zealand who is interning as a guest teacher at the summer school, is sharing Maori language, dance and song with students.

“When I applied for the internship, I thought reconnecting with our Pacific cousins – spending four weeks on Molokai, the old Hawaii – would be awesome,” said Te Kanawa. “I’m learning a lot from the kids – ‘I’ll share with you and you share with me.’” 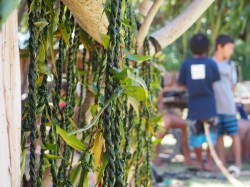 For some students, learning the Maori culture has been the most memorable.

On the grass under the coconut trees, with the fishpond’s calm blue as a backdrop, the group’s boys took off their shirts to proudly demonstrate the Haka, which they had learned in just a couple of weeks. The girls joined in, clapping and chanting in perpetuation of the Polynesian culture.

Han said the lei students made last week will be donated to the Kalaupapa lei project honoring the 45th anniversary of the end of isolation to the settlement, in which lei will be hung on Kalaupapa’s grave sites at the end of the month.

The summer school uses curriculum from Oahu’s Anuenue School, and while the program costs $190 per student, more than half of this year’s participants received tuition assistance from Alu Like.