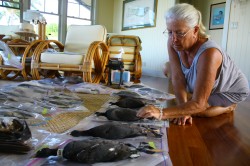 After completing over 40 taxidermies in her home, Arleone Dibben-Young takes endangered Hawaiian Coot taxidermies out of their bags. Photo by Jessica Ahles

Arleone Dibben-Young crouched in her living room and gestured to her less-than-lively guests. An albatross occupied her coffee table, Hawaiian Coots gathered on her rug, and a barn owl lay near her couch. She has been sharing her home with more than 40 taxidermy birds she has collected, prepared, stuffed and mounted for research.

Dibben-Young, Molokai’s water bird researcher, has dedicated the last three months to clean out her freezer of birds she’s acquired for the past 10 years, making taxidermies, or skins, she plans to donate to the Bishop Museum on Oahu.

“My freezer now is empty, hallelujah,” said Dibben-Young. “I promised my husband that any bird that I get in the future, I’d do the skin that weekend so it never gets [backlogged] again.”

Practicing bird taxidermy has been an integral part of biological research as early as the 18th and 19th centuries, said Dibben-Young.

As European ships traveled around the world in the 1700s, according to historical records, mere curiosity fueled the assembly of plants and animals. Diverse birds were hunted, collected and skinned to make flat pelts for easy storage on the ship. By the early 1800s, curiosity evolved into scientific research.

Over the years, federal laws changed, and under the U.S. Migratory Bird Treaty Act set in place in 1918, it is now forbidden to hunt, take, capture, kill or sell live or dead migratory birds. Currently, more than 800 species are listed and protected under the treaty, according to the U.S. Fish and Wildlife Service.

“Now it’s really difficult because you can’t just go and collect [birds] anymore,” said Dibben-Young. Birds in Hawaii are protected for and people can’t just go out and get them, she added

Molly Hagemann, the Bishop Museum’s vertebrate zoology collections manager, said they currently hold 35,000 birds in their collection. Only 81 specimens have been received from Molokai since 1902, according to the Museum’s database.

“For decades, Molokai has had a lack of any birder on the island,” said Dibben-Young. “The last birder was in 1969 so [compared to research gathered on other islands] there’s very little data on bird observations or bird populations on the island.”

Because of the laws set in place to restrict hunting birds, road kills, tower strikes, window kills, and depredation by cats are her primary methods of acquiring specimens.

“Typically if people find a fresh road kill, they’ll bring it by [my house],” laughed Dibben-Young. “They know, if it’s dead, just bring it to Arleone.”

In order to make a skin, the bird first has to be in decent condition and received before the body begins to rot. Any birds unsalvageable are taken to the landfill, according to Dibben-Young.

“It can’t be smelly yet,” she said. “If it’s stinky, forget it. You can’t do anything with it because the organs have melted inside and you just can’t get rid of that smell ever.”

Tools for taxidermy can range from surgical tools, art supplies, and even every-day kitchen utensils. Referring to her tool kit as her bag of tricks, she said she uses antique scalpels and pins decorated with real pearls, scissors and toenail clippers for cutting bones, pottery scrapers and small kitchen knives for scraping fat, and toothbrushes and tweezers for reaching into small areas.

The general process, according to Dibben-Young, first involves thoroughly soaking the birds in Coleman liquid fuel to dissolve the fat, then washed using dish soap, and dried via hairdryer.

The bird is cut and cleaned out, false eyes are placed into the head, and the body is stuffed with cotton and a stick to protect the shape. After the birds are stitched up and dried for a week, they are labeled for museum use.

The entire process can vary from one to 12 hours depending on the size and body type of the bird, said Dibben-Young. A skilled taxidermist can preserve the specimen for 400 years.

Sisters and Molokai High School (MHS) students Lily and Sarah Jenkins have been assisting, Dibben-Young with her wetland research for years and also helped taxidermy for the past three months.

“I didn’t really mind [working with the birds],” said Lily, a freshman at MHS. “We see a lot of dead things and my friend skins a lot of deer, but it was really cool just to learn the process and to see what the outcome is.”

Lily said her least favorite part was washing the bird because the length of time it could take, however the experience provides a good step into natural resources, a field both sisters are pursuing.

“I was able to learn a lot of the anatomy of the birds and it was really cool to get the hands on experience,” said Sarah, a junior at MHS. “This is something I probably won’t even get to do in college.”

Though Dibben-Young said taxidermy isn’t for everyone, the practice provides important information researchers can use to understand migration patterns and lifespan of endangered birds, which can provide better incentives for habitat preservation and predator control. Scientists can also use bird collections to analyze evolutionary processes as well as use genetics to learn about climate change.

“Right now, museum specimens from 200 years ago are being used to identify the habitat that the birds lived in,” said Dibben-Young. “[Researchers] are pulling out feathers and can tell what the weather conditions were, the climatic conditions at the time, what the bird was eating, and the habitat.”

Dibben-Young said she feels a moral responsibility to help fill the research gaps and continue to practice taxidermy, because museums and universities are in continuous need of specimens and very few are brought in from Molokai.

“Somebody has to do it,” Dibben-Young said. “It’s really important so if somebody has the ability to do it, they really need to. For me, that’s my contribution to the world of conservation.”