Students Turn Up the Heat in Culinary Club 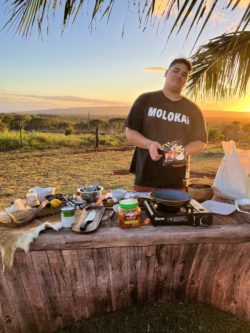 Something is simmering in a new Culinary Club at Molokai High School. The club’s 28 students are learning and growing in the cooking and food industry with advisor teacher Tiare Hubbard. Two of the participating students are also bringing their talents to a local recipe and video contest.

Through the Culinary Club, the students learn to coordinate, plan, and create new recipes every week. Guest speakers also come in to teach each young cook.

Two students are bringing the heat by submitting their Molokai-made recipes to Hawaii’s Food and Wine Festival competition, Localicious, this month. The contest not only gives them the chance to win $100-$300 but to get more exposure. Junior Marcus Hubbard and senior Jonah Sahagun joined the Culinary Club to expand their cooking knowledge and build their culinary confidence up to the competition level. The statewide student contest highlights original recipes featuring a locally grown, raised or caught product.

The pair submitted their original local recipes, which feature Molokai’s mauka to makai offerings, as well as demonstration videos required for submission that demonstrate their dish.

Marcus Hubbard’s mauka recipe is a kim chee deer burger with a sweet potato mash and cole slaw medley. Marcus said he grew up partially on the island of Maui and didn’t start hunting until living on Molokai. He recognizes that land to the table is essential to the Molokai lifestyle and chose to showcase it in his recipe. The deer burger dish Marcus presents to the contest contains Molokai deer he gathered himself. He acknowledged this had been a family recipe for a long time, coming from his grandma, mother, and now him.

“Make it simple and easy,” he said. 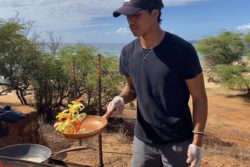 Jonah Sahagun is giving contest judges something to taco ‘bout with his recipe inspiration from the makai region. The dish he is entering is called Fresh Catch Taco. This taco contains pualu fish he went diving for and sweet purple pepper from the island.

“I chose this recipe because it brings back dishes I learned from my family and uncles,” said Jonah. “It also makes me involved with the island itself while fishing for my food.”

Sahagun already has a culinary background as he works in the kitchen at Hiro’s Ohana Grill. Being a  Molokai High senior, the Culinary Club is helping him practice his skills to achieve culinary school in Colorado after high school. He hopes this contest will give him a boost and inspire the club members.

Marcus and Jonah will continue their culinary competition journey knowing the importance of understanding where their food comes from. On Oct. 15, they could be one of the three chosen finalists who will prepare their recipes live in front of an audience and three chef judges at Hawaii Food and Wine Festival’s Localicious Cookoff event in Honolulu. 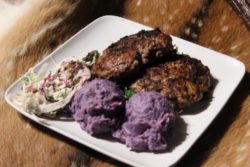 In addition to cooking up a storm, the club’s members are putting their growing skills to use to raise travel funds for college readiness. Tiare Hubbard has the goal of getting the students to preview the University of Hawaii Maui College’s culinary program, which they hope to visit in December.

“…We plan on our fundraiser, which should be happening Nov. 19. It’s still in the works, but we will be able to finalize the money we need,” said Hubbard.

Be on the lookout for more details on the fundraiser and competition results.