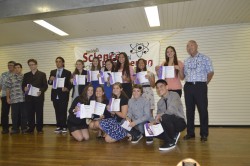 MHS students collected the most awards of any school at the fair. Photo courtesy of Momi Afelin.

At Molokai High, young scientists are doing groundbreaking studies to solve problems in their own backyards.

One group of students is turning invasive seaweed on the island into a profitable resource. Another is researching the destructive effect mangroves will have on Molokai’s coastline, finding that the trees have invaded over 60 percent of the island’s fishponds. These two projects won top honors at the Maui County Science Fair, and were chosen to represent Molokai and Maui County at the international level competition this spring.

“March of the Mangroves,” by Lily and Sarah Jenkins and “Investigating Agar Extraction” by MHS classmates Alexandria Simon, Amber Afelin and Kea`aokahonua Davis earned first and second place respectively at the county event on Feb. 4. Both groups are eligible to attend the Intel International Science and Engineering Fair (ISEF) in Pittsburgh in May.

“It’s important to put Molokai on the map,” said Afelin. “There’s so much untapped potential, and bringing us the international science and engineering fair is a huge opportunity for us to show the rest of the world just how much we have.”

They were joined by fellow MHS and Molokai Middle School (MMS) students in bringing home the most honors of the Maui district schools in attendance.

Five Molokai projects were selected as Merit Award Winners at the county fair. These projects received a $50 check and qualified for the state science fair. Merit winners included “March of the Mangroves,” “Investigating Agar Extraction,” “Bring V.A.K. Back” by Caele and Cendall Manley, and “The Effects of Microwave Stimulus on Radish Seeds” by Awa Yerhot and Jacob Norris from MHS. “Molokai South Shore Ocean Water and Study” by Evelyn Haase of MMS was also named a Merit winner.

Two Molokai projects were awarded Honorable Mention and were also eligible to move on to the state competition. MHS’s Genevieve Kikukawa was named Honorable Mention for her project “Enhancing Soil with Legumes,” as was MMS’s Ayla-Rose Ramos for “Growth of the Mangrove.”

Molokai students also took home nine of the 13 “special awards” given by organizations such as Maui Electric Company, the American Psychological Association and the National Oceanic and Atmospheric Association. 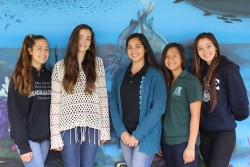 These five MHS students hope to bring their findings to the international science fair in May. From left to right: Sarah Jenkins, Lily Jenkins, Momi Afelin, Keaaokahonua Davis and Alexandria Simon. Photo by Colleen Uechi.

“It spreads by fragmentation, so every time you break a piece off it basically grows into another whole plant,” said Davis. “There’s really no use for it, so it’s just been growing and growing. The state’s been putting a lot of money into pulling it out … so that’s where basically our project comes in. Our project was basically trying to find a use for this algae.”

The three MHS juniors discovered that the agar, a jellylike substance that can be extracted from algae, can be used in cultivating bacteria, cooking, making cosmetics and creating a polymer base for bioplastics, or plastics made from renewable and natural items. Their goal, they explained, was to find ways to make agar a profitable product that would help fund the elimination of the gorilla ogo itself.

“We want to look at how we’re gonna create this into a business that has some sustainability, ‘cause right now it’s coming out of our government’s pockets trying to eradicate this species,” said Afelin. “The plan is to actually get it eradicated through the business of selling agar.”

Meanwhile, “March of the Mangroves” was prompted by the effects of mangroves encroaching on Molokai’s coastline. The tree was originally brought to the island with good intentions.

“Mangrove was first introduced in Palaau in 1902 … to try to protect the south shore and coastline from sediment and run off,” said Lily, a junior at MHS.

However, the trees have now become an invasive species that has changed such ocean properties and converted water into dry land. Mangroves have also become a host for other invasive creatures. The Jenkins sisters mapped the Molokai shoreline and found that extent to which the mangroves are taking over the landscape is shocking. Within our lifetime, said Sarah, the mangroves could fill in the coral reefs on Molokai’s south shore.

The sisters said mangrove has to be removed manually. Researchers have also been working on different methods of eradication, including a chemical that could eliminate the mangrove but dissolve harmlessly once it makes contact with water. However, while research on the subject continues to be conducted, the sisters said it’ll take smart planning and hard work days by communities.

“It’s established itself in six of the eight main Hawaiian islands,” said Sarah. “… We need to develop this management plan now to try to remove it as fast as possible, because the impacts it has are very, very tragic.”

The students hope to bring these Molokai-based issues to an international level at the Intel ISEF. According to Intel, the American technology company that sponsors the fair, the event is the “world’s largest pre-college science competition,” featuring nearly 1,800 students from around the globe. Sarah, who’s attended the fair twice before, said it’s a great chance to interact with potential peers and employers.

“It’s a really good experience cause you not only get to present your research, you get a lot of feedback from those professors, so it’s almost like your talking to your future employers,” said Sarah. “Your judges are actually specialists in the area … so you have to really know your stuff or they’ll basically pick you apart.”

Lily added that it’s motivation for students on a small island like Molokai who may doubt they can bring their knowledge to international levels.

The two groups are now fundraising for the fair. Each needs to raise $2,500, and a press release from MHS Science Department Chair Malia Lee estimates that the total trip cost will be nearly $20,000. The students are writing letters to potential sponsors and said that once they know how much money the county will be able to contribute, they’ll be able to start a GoFundMe page.